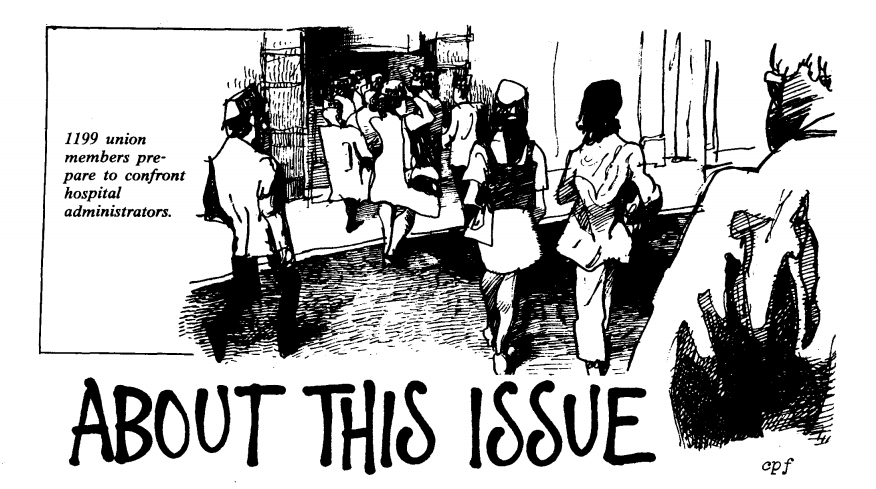 When our editorial collective began to work on this issue, we decided not to organize it around a single topic. We wanted an issue that would be of broad interest, and hope we have suceeded. To us the most important themes of this magazine are women’s issues and the hidden faces of health care. These two topics are not disconnected; health care has actually appeared as an underlying theme in the analysis of attitudes towards women.

What has emerged about health care in general is not an overall analysis of our health care system, but a collection of perspectives from different groups: health workers, experimental subjects, and those whose health has been jeopardized by their working conditions.

There is much more to the health care system than doctors and hospitals. Necessary supportive services are provided by other people who are not all satisfied with their work situations.  “Technicians and 1199” is our first look at work and organizing in hospital laboratories. Important preventive care can take place outside of hospitals and need not rely solely on medical professionals. “Aiding Workers’ Struggles” provides an example of how this work can be done in a political context. The new “Health and Nutrition” column warns that we pay to be poisoned.

While many people are aware that their health needs are not being met by the present system, we seldom hear of groups who are actually hurt (“First Our Land, Now Our Health“) or stigmatized (“XYY or XYY?“) by their contact with the health care system. These groups are among the subjects of medical experiments and will probably never benefit from the results of the studies. 90% of all first human tests of drugs are on prisoners, yet prison health conditions are notoriously sub-standard (“Inside Prison Walls“).

Women have taken the lead in challenging the health care system. The women’s health movement has given impetus to investigating the foundations of medicine. We review a recent contribution to our understanding of the historical roots of male-oriented medicine (“Review: Witches, Midwives and Nurses“). “Women as Objects” details the influence male-centered culture has had on medical science in the exclusion of women from scientific societies, in the care given to women as patients, and in the study of women as scientific objects. Looking from an historical and political perspective, the author gives evidence that biology has been used to rationalize the inferior status of women.

Each of the articles, each hidden face, reveals the roles science, specifically medicine, plays in a class society. This is not any different from the understanding that Science for the People has developed about science as a whole. In our society, science is not neutral and is used as an instrument of control, a tool which gives ideological, economic and coercive power to the few (“Science: Political and Personal“).

The material in this issue comes from people actively engaged in political work. It is not the product of academic thinkers. Whether exposing the anti-people uses of science, providing technical assistance in progressive struggles, or organizing at scientific workplaces, this is Science for the People. We hope this issue will contribute to our understanding and action.

In the last issue we began a special page on science teaching. We have added what we hope will be two other regular columns, one from women in SftP and one on health and nutrition.

EDITORIAL PRACTICE: Each issue of Science for the People is prepared by a collective assembled from volunteers by the magazine coordinating committee. A collective carries out all editorial, production, and distribution functions for one issue. The following is a distillation of the actual practice of past collectives.

Due dates: Articles received by the first week of an odd-numbered month can generally be considered for the magazine to.be issued on the 15th of the next month.

Opportunities for participation: Volunteers for editorial collectives should be aware that each issue requires a substantial contribution of time and energy for a twelve-week period. Help is always appreciated and provides an opportunity for the helper to learn and for the collective to get to know a prospective member. There are presently plans to move the magazine production to other cities. This will increase the opportunity for participation. For legal purposes, Science for the People has become incorporated. Science for the People is now available in microfilm from Xerox University Microfilms, 300 North Zeeb Rd., Ann Arbor, Mich. 48106, (313) 761-4700.