Review: Witches, Midwives, and Nurses — A History of Women Healers

The author is a member of a group of women, associated with Science for the People in the Boston area, who are writing several articles on how scientific ideology is used to oppress women. These articles will be published this year as a (still untitled) book.

Health care in the western world has not always been dominated by (male) professionals. Before the professionals took over, health care was practiced mainly by autonomous healers, mostly women. Conventional medical histories usually claim that the professional takeover was just a case of hard science and technology winning out over women because men are more suited for the incisive, empirical approach demanded by scientific medicine; women are more suited for nurturing and curing — to be nurses.

Differences from country to country in the structure of health care indicate that there is something not entirely right with these reasons. Although health care is mainly controlled by male professionals in Western Europe, it is neither as male dominated nor as professionally oriented as in the United States. For example, in England, twenty-four percent of doctors are women whereas in the United States seven percent are. Midwivery exists in European countries as a respected occupation for women but has virtually been outlawed in the United States since the early 1900’s. In England eighty percent of all births are delivered by midwives, often in the mother’s home. Midwives are also an important part of the medical scene in Sweden, Germany, the Netherlands, and France.

In the pamphlet, Witches, Midwives, and Nurses, Barbara Ehrenreich and Deirdre English describe important phases in the male professional takeover of health care in Europe and in the United States. Surprisingly, the professional takeover in Europe was accomplished by the suppression of witches which occurred at different times in various countries roughly in the period from 1300-1700. In the United States, the main takeover took place around the 1900’s. 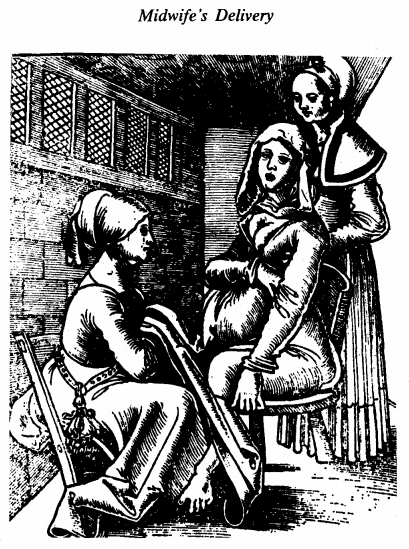 Moreover, as the authors point out, the professinal takeover of health care was part of a class struggle. The lay healers were frequently the only healers for the poor and women; they were people’s doctors and an autonomous group in the people’s subculture. However, the rise of professional doctors (and professionals, in general) in both Europe and the United States depended upon the wealthy and powerful in the society, a dominant elite which had the power to make or influence laws which certified a particular group as being “professional” and outlawed all others. For this reason and others, including great prestige, high income, and training, most professionals identify with the needs of the dominant elite rather than with those of the people; besides serving as technocrats, they help rationalize and justify the status quo.1,2

As the authors stress, the witch-hunts in medieval Europe were due neither to the hysteria of the masses who went on lynching raids nor to the hysteria of women suddenly gone mad, the conventional medical explanations. “The witch-hunts were well-organized campaigns, initiated, financed and executed by Church and State.” Reliable sources have estimated that as many as millions of witches were killed — eighty-five percent of those executed were women. A main target of the witch hunts was the autonomous lay healers, called “wise-women” by the people, but “witches” by the authorities.

The growth of commerce and towns led to the foundation of universities in the twelfth and thirteenth centuries. The universities produced the professionals needed by the new rising middle class in the towns, lawyers and judges, doctors and theologians. The medieval university was under the control of the Church, and its teachings were decidedly anti-empirical, including that in medicine. Medical students spent years studying Plato, Aristotle, and Christian theology, but no experimentation of any kind was taught.

There is good evidence that the lay healers were to some extent empirical and through observation and testing discovered a number of drugs and herbs still used today, for example, ergot, belladonna, and digitalis. As empiricists and autonomous lay healers, these women were a threat to the authority of the Church. In the fourteenth century, the Church effectively declared that a woman who dared to cure without having studied (at the universities, of course) was a witch and had to die. Later, the Protestants likewise declared unlicensed healers and midwives to be witches.

The takeover by the (male) professionals in this period was due to the massive campaign of suppression of the lay healers as witches and not because of the superiority of the medical theory or practices of the professionals.

The authors also make the very good point of differentiating between expertise (which they are decidedly for) and professionalism (which they are strongly opposed to). The history of health care shows that the two words are not at all synonomous.

The authors suggest that the witch-hunts had deeper social’ significance beyond the history of medicine:

In locale and timing, the most virulent witch hunts were associated with periods of great social upheaval shaking feudalism at its roots — mass peasant uprisings and conspiracies, the beginnings of capitalism, and the rise of Protestantism. 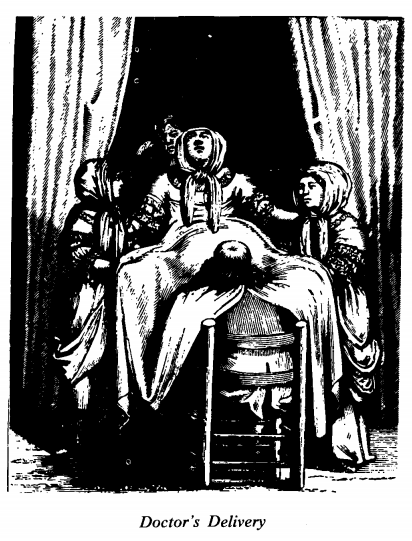 This is undoubtedly true; and it is unfortunate that the authors did not pursue these questions further since the witch-hunts were related to other important events — the Inquisition, and the increasing exclusion of women from all the better-paying trades, not just health care, in the sixteenth and seventeenth centuries.

The active takeover of health care by male professionals which occurred in the United States around the 1900’s was part of the tremendous growth in the number of colleges and universities, modelled on the research institutes of Germany, and the development of professionals as an intellectual elite. The growth was fostered and shaped by huge sums of money donated by the extremely wealthy corporate elite, such as Rockefeller and Carnegie, either directly through grants or indirectly thorugh the foundations they founded.

Again the male professional takeover was not due to any substantive advantage that practicing doctors had over lay healers. The case of obstetrics is an interesting one to consider. Here the professionals did have an edge — the most important being techniques for combatting puerperal sepsis (uterine infections) and neonatal opthalmia (blindness due to parental infection with gonorrhea). Midwives would have been quite capable of grasping these techniques, needing only an upgrading of their training as occurred in Europe.

Professionalization of obstetrics, which costs considerably more, meant worse or no obstetrical care for poor women. For example in the years immediately after the passage of the law forbidding midwifery in the early 1900’s there was a rise in the infant mortality in Washington. Midwifery did not die out completely, but has been used primarily for the poor or in remote areas, such as Appalachia.

These points are all brought out by Patrick Young in an article “The Thoroughly Modern Midwife, “3 in which he described the move to introduce nurse-midwives (their new para-professional title) for general obstetrical care. This move was endorsed by professional obstetricians in October, 1970, apparently because fewer doctors are going into obstetrics. Since the American Medical Association carefully controls the number of doctors, this probably means greener (more lucrative) pastures are opening elsewhere. A good part of the reason, however, may be the pressure from the women’s health movement demanding better, more humane health care which professional doctors may be unwilling to provide. After all, there probably is more money to be made elsewhere than to wait up all night and more through a delivery by natural childbirth.

Young goes on to quote statistics which show how the introduction of nurse-midwives in poor communities produced spectacular reductions in the infant mortality rates. For example, in Holmes County, Mississippi, the rate declined from 39 deaths per 1000 live births in 1960 to 17 per 1000 live births in 1970 after five nurse-midwives spent the year working among poor mothers. Ehrenreich and English show that the effects of outlawing midwives was apparent in the years immediately after the law was passed.

According to the authors, the sexist opposition to women in medicine was more virulent and the male takeover went further in the United States partly because the feminist movement was stronger and more threatening than that in Europe. The history of Women’s Movements are usually strongest in periods when there are other active radical movements. Second, sexism is closely related to racism. Thus, the turn of the twentieth century was also marked by virulent racism and considerable social unrest, particularly among the more recent immigrants. Scientists at the newly established universities conveniently reinforced the prevalent racist and sexist sentiments, finding non-whites totally subhuman, new immigrants utterly inferior, and of course, women physically and mentally inferior to men.

Today, such diverse elements in society as middle-class white women and the urban poor, mainly Blacks, Puerto-Ricans, and Chicanos, are increasingly criticizing the prohibitive costs, the sexism, the facism, and the practices of the medical profession and health care institutions.

The average annual income of a practicing doctor is $45,000; a “high earner,” a cardiac surgeon, for example, often makes more than $250,000 a year. Power within the highly structured medical profession is closely correlated with sex and race. Ninety-three percent of doctors are men, as are almost all the top directors and administrators. Seventy percent of all health workers, however, are women. Most of these women, especially if they are black or some other minority, work at the lowest paying, most menial jobs.

Comments on “Witches, Midwives, and Nurses”

This slim pamphlet has a number of flaws — one being that it is overpriced, but still worth getting. Another is that the authors cover such a vast amount of material in so few pages (43) that various questions are not dealt with in sufficient detail. The authors essentially rely upon the reader having ·a certain background and state of consciousness. Some of the points made appear to be overstated: for example, statements about the Popular Health Movement in the United States in the 1840’s and 1850’s should be further substantiated. Overall, however, the pamphlet is excellent. Ehrenreich and English have succeeded in bringing together a great deal of information. The efforts of these authors have to be commended. Their endeavor illustrates a number of crucial points. It demonstrates the need to demystify professionalism in history as well as in medicine. The pamphlet shows why it is so important for women to discover and analyze their own history, both to help debunk myths and to gain new insights into their struggles today.

NOTE: Sections of the review which are not attributed to specific sources are based primarily upon Witches, Midwives, and Nurses and material in the articles which the author’s group is writing.

Women as Objects: Science and Sexual Politics
Science for the People: The Natural Birth of a Woman’s Group