I showed the article you sent me [on vinyl chloride] to some people in the shop. Someone copied it, and put it on a bulletin board with a note saying, “I see we work in a cancer factory.” Well, the company called a meeting right away, and told us all the things they were going to do about the problem. They told us we were okay, that those people got sick in the Goodrich plant because. of the way they did things twenty years ago. That may be true, but I don’t want to get sick in twenty years because of something we’re doing today. They gave us a list of chemicals we’d been after for months, and promised action on other problems. They know about [name of another safety committee member] and me, we’re always active and giving them trouble, but when the other guys start talking, then management gets worried. “

Health and safety is an issue around which academic people and workers have come together to try to effect some change in the conditions within plants. In this article I will attempt to relate my experiences of providing technical assistance to workers as they organized themselves around a particular incident of occupational health.

Where did this concern about health and safety grow out of? The issue itself has existed for a long time. Public concern with toxic effects of chemicals created fertile soil in which workers’ complaints about conditions inside the plant grew. The threat that workplace hazards might leak into the community was another contributing factor to new public interest in workers’ problems. As a result of this concern the Occupational Safety and Health Act (O.S.H.A.) was passed in 1971. Besides showing that people are at least aware that the problem exists, the law as a national code unites local actions. The federal standards provide a framework for the examination of working conditions and lend more credibility to the results. Many feel that this law can have a real impact on rank and file workers’ interest in plant problems and conditions, and may also serve to increase workers’ militancy.

My own experience with this issue has been through the Health and safety Project at Urban Planning Aid (U.P.A.)1 I am part of a group of eight people who provide information about the technical and legal aspects of the problem to workers who are attempting to fight about health and safety issues. This project is about four years old, and uses different techniques to reach people: education, technical assistance, legal struggles, and publications. 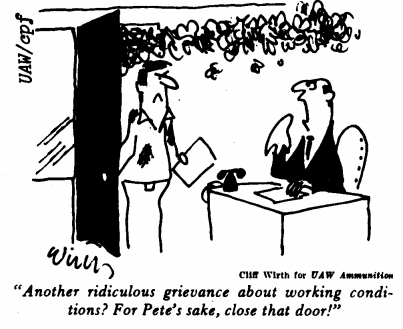 The educational part of the project includes giving courses in health and safety in which the law, technical information and other people’s experiences are discussed. Usually, a course like this is given. at night and runs for about five two-hour sessions. They have often been arranged through the U. Mass. Institute for Labor Affairs. The U. Mass. Institute is closely tied to the state AFL-CIO, and sets up these courses by contacting union leaders, who in turn contact the locals. The courses are attended by a varied group of people: rank and file workers, safety committee members, stewards and local union officials. People from community groups and workplace-oriented organizers have also initiated courses.

At the present time there have been over 200 students in these courses, representing a cross section of active union members and other political activists. The effect of the course on these “students”‘ is that they return to their workplace as more safety-conscious people, equipped with knowledge about the procedures for carrying out needed changes.

Another phase of the work done by the project is technical assistance. We have been in touch with a large number of situations on an intermittant basis. Generally we get calls about specific problems: What’s in this material? Can we use the noise meter? Can you explain our legal rights? We send out literature, give answers, often go out and meet with safety committees a few times, and have even been brought into a couple of plants. In many cases we have played intermediary between the workers and state agencies involved in this area.

The U.P.A. project worked closely with the O.S.H.A. Committee of the State Labor Council (which included participation of non-AFL-CIO unions) to defeat the Mass. State Plan. State enforcement would have been less aggressive than federal enforcement of the safety and health law. We found a movement lawyer to analyze proposed legislation, helped organize testimony at the State House, and induced interested academic scientists to testify at the State House. The opportunity to make people more aware of the issue made struggle on the legislative front worthwhile.

A fourth tactic used by people in the project to spread information is publications, which include a series of pamphlets and fact sheets (A Unionist’s Guide to O.S.H.A. and How to Look at Your Plant — see the July issue of SftP). We also put out a monthly newsletter called Survival Kit, which includes articles by workers, accounts of conditions and struggles, technical information and legal information.

The project has viewed its main work as intensive and continued contact with the rank and file of local unions or with groups of unorganized workers. It is important for us to be useful to these people, to supply them with enough real information. It is important for us to not just serve as a gripe center; we must do more than just tell people how lousy their jobs are. We want to provide people with tools and support, we want to aid union organizing drives, and we want to learn the realities and politics of factory work. However, we are dependent on the union and how far they want to push; this has often tied us to the middle level of the union hierarchy and separated us from the rank and file.

The level or organization and militancy in the shop can also be a limitation, but there is no one model into which all our experiences fit neatly. There is no stereotype which accurately describes all union leaders or all rank-and-filers, nor do these people seem to be always consistent in their actions all of the time.

We still have a lot more to learn about the role unions play today. Why is it that the triumverate of minorities/ women/young workers, who are supposed to drive the labor movement to the left, are often the segment of the work force with the lowest participation in unions? Are workers’ -control-type demands qualitatively different from the economic demands traditionally pursued by American unions?

My assessment is that there are no demands which are inherently less co-optable than others; it all depends on the circumstances. It seems to me that it’s participation from the bottom which is the key to whether workplace struggles are ultimately progressive.

We are continually trying to figure out what we are doing and why. In the struggle situations it’s not always clear how a specific instance relates to ultimate political goals. We certainly don’t know as much about the problems as the women and men in the shop. We see ourselves primarily as resource people, as catalysts to the. workers’ actions, and as allies. This is the kind of work where SESPA/SftP members can join in.

Science for the People: The Natural Birth of a Woman’s Group
Technicians and 1199