Each year, sandwiched between Christmas and New Year’s days, the American Association for the Advancement of Science (AAAS) holds its annual meeting in a major American city, with its headquarters in a towering hotel of a major American hotel chain. Invariably, not very far away is a major American ghetto, and of course there is a major American parking problem in the vicinity of the hotel. The modest prices charged in the hotel’s coffee shop are a constant reminder that the primary function of such hostelries is to provide for the simple human needs of the weary, hungry travellers that seek its temporary shelter.

This year it was at the Sheraton Hotel on John F. Kennedy Boulevard at 17th Street in downtown Philadelphia that the AAAS made its headquarters for six days. As a salute on the opening day of this great convocation of American scientists in the City of Brotherly Love, and in order adequately to celebrate the value of science to humanity, the President ordered the greatest aerial bombardment of his America’s enemies in Indochina (the Indochinese people) in many a moon. Fortunately, the President’s employment of science and technology in advancing the cause of democracy was nine thousand miles away, and did not interfere with the happy post-Christmas tinkling of the cash registers of the I.T.&T.-owned Sheraton hotel.

To this momentary mecca of scientific expertise came such notable objective scholars as Hubert Humphrey, Daniel Patrick Moynihan, and William Bundy, each in his own way a caricature of Americana. Not present at the convention, but eager to add his scholarly observations nevertheless was ex-Communist and now-seer-of-the-true-light, Professor of Philosophy Sidney Hook, whose homage to “a handful of fanatics, invoking ‘science for the people'” appeared in the New York Times of January 17, 1972.

An especially astute observer at the Sheraton or at one of the four or five other hotels that the conference also used might have perceived that the vast majority of the conferees were not women, were not Black, were not Puerto Rican, were not poor. But those who worked in the. hotels were cut from different cloth than the conferees. Arid that division too is part of America. And so is the ideology that helps to maintain it.

Among the fanatics were some—whom we may call the ‘Herrnstein buffs’—who believe that it is important to try to combat the ideology that helps to justify the class divisions in American society. So, with zeal that only fanatics can muster, some members of the Boston chapter of Science for the People prepared sixty reams of literature (actually it’s not literature that a writer would write) on the Herrnstein controversy (see the article, “Science in the Justification of Class Structure“, Science for the People, Vol. IV, No. 1, p. 6, January 1972). This ‘literature’, together with lots of other stuff, got packed into a truck borrowed from the Boston Black Panther Party for the trip to Philadelphia. The saga of that trip—but never mind! Had the CIA decided to prevent the truck from getting beyond Ozzie’s Gulf service station in Fairfield, Connecticut, they could hardly have done better than to rely on the scientific and technical expertise of the Boston fanaties. But the contents of the truck made it to Philly.

When copies of the pamphlet on Herrnstein arrived at the hotels, an unusual thing happened. The people who worked in the hotels were just as interested in it as were the conferees. And why not? That’s part of what Science for the People is supposed to be all about. Here’s a quote (from an article on the New York City public schools) that the pamphlet (cover pictured below) contained:

Perhaps an even greater achievement of the schools has been their ability to place the responsibility for this extraordinary record of failure upon the children themselves, their families, and their communities. Social scientists engage in learned disputes as to whether it is heredity or environment that makes the child of poverty an inferior form of humankind-but the assumption of his inferiority is not disputed, except by his parents and by the child himself ….

The curve of reading achievement by school in New York City is strange. It is bi-modal, a double-humped “normal” curve. It peaks at two-and-a-half years below grade level, falls to nearly zero at grade level, and then rises to a peak again at two and a half years above grade level. Black and Puerto Rican schools lie on the below-grade half of the curve, continental white schools on the above-grade. There are, in effect, two independent curves, one for Blacks and Puerto Ricans, the other for whites. They are a graphic description of two school systems—one that fails and one that succeeds. Thus, the accomplishment of the school system is even more impressive. Their task is not only to succeed in failing the Black and Puerto Rican children; they must, at the same time, succeed in teaching the white children how to read well.

Both goals are essential to reproduce the economic and political life of the city. Blacks and Puerto Ricans are needed to man the restaurant kitchens, the hospital orderly jobs, the hand-trucks and workrooms of the garment district, the unskilled port jobs, and the draft calls. “Others”, the delicate euphemism for whites invented by our skittish schools, must be trained to fill the hundreds of thousands of office jobs in this financial and commercial capital of the world. Fresh new vigor must be recruited from the white middle class to renew the executive and managerial elites that run the city’s business and politics ….

. . . In Dark Ghetto Clark states the charge later confirmed experimentally by Rosenthal and Jacobson: “These children, by and large, do not learn because they are not being taught effectively and they are not being taught because those who are charged with the responsibility of teaching them do not believe that they can learn, do not expect that they can learn, and do not act toward them in ways which help them to learn.” 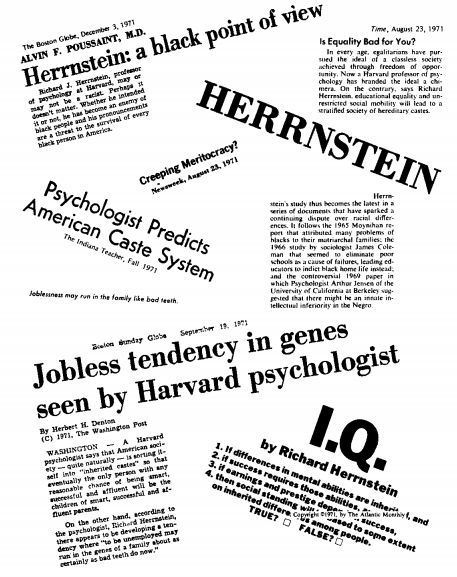 An effort that had been planned by these same Boston fanatics was the widespread circulation of a public statement on the Herrnstein controversy, followed by a drive to secure signatures from many of the conferees. However, the stepped-up aerial war and the felt need to respond affirmatively to the Vietnam Veterans Against the War, who asked the radical scientists at the AAAS convention for their support, and for help in obtaining that of the other scientists there for the veterans’ demonstrations, undercut the drive for signatures.

Additional copies of the statement, as well as of the pamphlet, are available at the Boston office of Science for the People, 9 Walden St., Jamaica Plain, Mass. 02130