The March issue, like all other issues of Science for the People, represents people as much as it does ideas or facts. Steve Hollis (Brother Hollis Writes from Kansas, p. 25) is just another one of us who finds that the pains, pleasures, experiences and concerns of his life are the common experience of us all. Our sister, A.F. writes from Chicago (p. 23) showing the true comrade she is by helping us all learn through criticism. The actions at Philly that she criticizes are discussed (also critically) in several letters and articles in this issue. Chandler Davis recounts his experiences in China and Vietnam (Mathematics in China and Vietnam, p. 19) without censoring his own doubts and biases.

“… Everyone had struggled with themselves, with each other … People had practiced the concept of consensus, of everyone struggling together to arrive at decisions that everyone finds acceptable … People knew each other’s personal strengths, weaknesses, convictions, and emotions.” We borrow these words (AAAS Actions at Philadelphia, p. 4) to describe ourselves, the editorial collective of this month’s Science for the People. We are people first, then literary critics: we range in age from 19 to 46, in occupation from physicist to secretary, are black and white, women and men, and encompass a wide range of experience, attitudes, and personality types. But since part of our struggle in this society is against dehumanizing exploitation, it is a pleasure to engage in the struggle of putting together this magazine, an experience which is so well described by the preceding quote. We feel that the personality on the cover embodies our entities.

We ask you to share a little of yourselves — what you think and feel as you read these pages and live your lives. Please write — double-spaced. 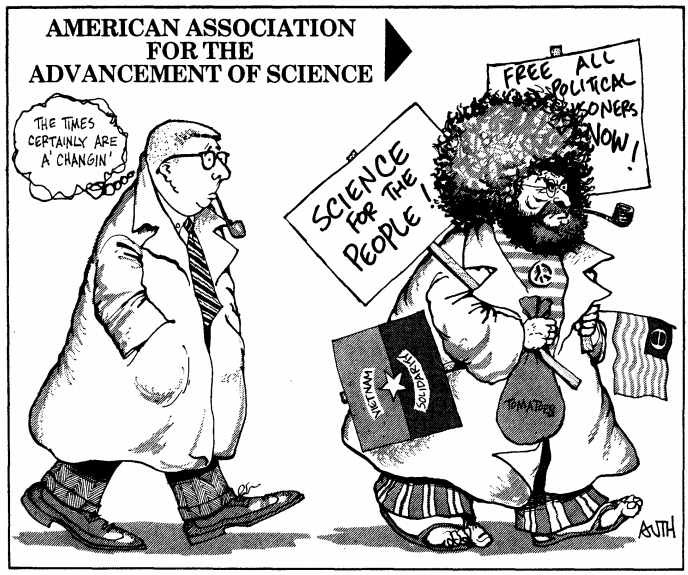 Criteria for acceptance: SESPA Newsletter, predecessor to Science for the People, was pledged to print everything submitted. It is no longer feasible to continue this policy, although the practice thus far has been to print all articles descriptive of SESPA/Science for the People activities. Considerably more descrimination is applied to analytical articles. These are expected to reflect the general political outlook of Science for the People. All articles are judged on the basis of length, style, subject and content.

Editorial Procedure: The content of each issue is determined by unanimous consent of the collective. Where extensive rewriting of an article is required, the preference of the collective is to discuss the changes with the author. If this is not practical, reasons for rejection are sent to the author. An attempt is made to convey suggestions
for improvement. If an article is late or excluded for lack of space or if it has non-unanimous support, it is generally passed on to the next collective.

Opportunities for participation: Volunteers for editorial collectives should be aware that each issue requires a substantial contribution of time and energy for an eight-week period. Help is always appreciated and provides an opportunity for the helper to learn and for the collective to get to know a prospective member. There are presently plans to move the magazine production to other cities. This will increase the opportunity for participation. For legal purposes Science for the People has become incorporated.

ERRATUM (pg 11)
In the January 1972 (Vol. IV, No. 1) issue of Science for the People, credit for the pictures on pages 20 and 21 was omitted. They were made available by the People’s Free Health Center—a Black Panther Party community survival program, Massachusetts State Chapter. Thanks.

AAAS Actions at Philadelphia: The Solidarity of the Long-Distance Activists