Letters from a Political Prisoner 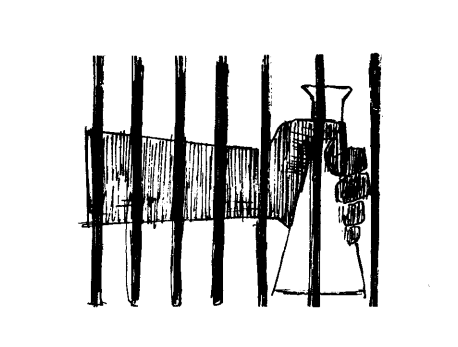 Last spring the Ely Lilly Award was bestowed on Jon Beckwith a young professor at Harvard Medical School in recognition of the work of his coworkers and himself (see “Heroes of our Time”, p 14). Jon turned the awarded money over to the Black Panther Party. At the 1970 meeting of the American Society of Microbiology he explained his symbolic and material gesture by stating that the Black Panther Party “is contributing in a meaningful way to the welfare of all people.” Various response followed, among them these letters from a New York prison. The letters speak for themselves.

I am writing to personally thank you for your donation to the Black Panther Party. I am very glad you have taken a position — we need more of the scientific world to take a position. As a fellow scientist I have been trying to get more scientists to take a position but it has been hard since I am in jail. I am Dr. Curtis Powell, PhD in Biochemistry and a member of the Black Panther Party—in fact a member of the ‘NY 21’.

My alleged act in this farce is an alleged statement ‘that some people in New York should be killed.’ Out at my home they confiscated what they considered to be ‘explosive material’—1 pint bottle of hydrochloric acid, 1 pint of aniline, 1 pint of propyl aniline, and 2 small bottles of rat urine.

I have been in jail with my compatriots for over a year now on $100,000 bail. As scientists we both know how much this nation must be changed and how much people and we scientists are exploited. But it has been somewhat difficult to get scientists to speak out against the repression that is upon us. That is why I was so glad to hear about you . . . . We could use all the support we can get. Maybe with your help some support could be gotten in the scientific community.

There is so much that is not readily known, even some things that I have learned since being incarcerated. For instance, in USA law and order is white, but 90% of the prisoners are black. How we as scientists are ‘specialized slaves’ aiding the Free-Enterprise-super-rich-military-industrial-Wall Street-Big-Finance-Kings in their attempt to enslave mankind for their own profit under the guise of ‘freedom and democracy’. The U.S. friends like the Thieu-Ky government, Greek government, Spanish government, Papa Doc Duvalier, etc.—all Fascists-Imperialists. Note how U.S. and Russia are moving closer together.

I would like to discuss your research and mine, but right now repression is upon us and I am not only fighting for my life (we are facing 150 years apiece) but for the lives of all oppressed people … I would like to hear from you soon.

Thank you for your letter. I am sorry I am just writing, but I just received your letter tonight. You see my mother, the only parent I have left, is very sick and just got out of the hospital (the doctor is not sure she will live through the trial) and my sister goes into the hospital tomorrow . . . .

I do remember you from Paris — a lot has happened since then. All of the brothers had a big laugh at seeing their comrade in some of the ‘old days’ flicks.

This country has become a sophisticated fourth Reich; and after Kent State the mother country people are now just beginning to ask what we blacks have been asking for years. Just how sophisticated? After 13 months in isolation, watching what this system does to poor people, how they are railroaded in jail. as [sic] Dostoevski stated in House of the Dead ‘the degree of civilization in a society can be judged by entering its prisons’. It’s not too sophisticated — in fact it’s barbaric … I have seen men beaten to death, men commit suicide, men become completely messed up while in jail awaiting trial for doing nothing, but just for being poor and/or black. Augusta, Ga., Cambodia, Kent State the construction workers in New York; this country is a barbaric, savage, criminal, violent, filthy, racist fourth Reich. You know I was at Columbia P and S (College of Physicians and Surgeons); D.A. Frank Hogan who indicted us on this ridiculous, incredulous indictment is on the Board of Trustees — dig that — along with members of the military industrial complex, of course.

Your Award Address must have been a mind-blower for them. I think it is great — Right On! You hit on a subject which is the scientist vs. the active role in the struggle for the liberation of the oppressed. I am a scientist, I love my research, I am at home in a lab, but my people call, and I hear their call. I know how our experiments get fouled around by the military-industrial complex — I guess you know about that. I only wish that scientists in this country could understand and do something. It might help solve this dilemma, and if there were some more scientists willing to stop ‘playing their passive role assigned to them . . !’ . . . maybe together, your group and (others) can get something going. You can use my letter or any part of it … or anything that you feel might help in rousing other scientists. I can’t be in any more trouble with the prison authorities or any other authorities than I am now. And now that we are finally together they are afraid to come down on us any more than usual.

Do you know that in 1/3 of the world, the whole nonwhite world just about, the life expectancy is approximately 33-36 years. What are we doing research for?

I am very interested in your group ‘Science for the People’. Can you send me some more on it and what it is trying to accomplish. We of the 21 feel that the military industrial complex must be destroyed, that the exploitation of people like by the drug companies and the A.M.A. must be stopped by any means necessary. The scientific community is in a unique position for that struggle. As for anything else, ‘Science for the People’ may help in solving the many complex contradictions that have arisen between . . . scientists being ‘specialized slaves’ in academic towers versus reality and the horrible plight of the oppressed.

Hope to hear from you very soon.

Yours in the Revolution,
Curtis