Class societies must provide a system of police in order to maintain themselves. Historically such a system has had a dual basis, physical and ideological. The development of ideological weaponry is accomplished largely through the work of intellectuals. To counteract the ideological arsenal has been, and still is, an important responsibility of the left.

A currently popular form of ideological weaponry is a somewhat amorphous and pseudo-scientific collection of statistics and speculation which might be collected under the heading “biological determinism.” This reactionary doctrine treats many human problems as simply outgrowths of “scientific” biological fact, ignoring environmental (social) causes. The low performance of many blacks on I.Q. tests is explained through the biological “laws” of genetics, that poor people starve is an outgrowth of the biological “law” of exponential population growth, women are accorded lesser social roles by the biological “laws” of hormonal reality, and so forth. Clearly, biological determinism qualifies as a potent ideological weapon.

In light of much recent propaganda aimed at resurrecting biological determinism to be used in the ideological arsenal, the Ann Arbor chapter of Science for the People organized a symposium, “Biological Determinism: A Critical Appraisal”, which included speakers, workshops, and a weekend retreat. The symposium took place Sept. 29 – Oct. 5, 1975, and drew a great deal of attention to the subject. The University of Michigan “values year” program came up with $1000.00 to help support our symposium.

Richard Lewontin, a Harvard population geneticist, opened the symposium with an introduction to “Biological Determinism as a Social Weapon”. Lewontin began by tracing the history of biological determinism, emphasizing how it has been used to justify the existence of grossly unequal distributions of wealth and power by “proving” scientifically that those who received a disproportionately small fraction of society’s products did so because they were inherently inferior. He then analyzed the pseudoscientific methodology of the neodeterminists, pointing out that their arguments are motivated by a desire to support status quo ideology (consciously or unconsciously) and only trivially, if at all, out of an honest quest for “objective” scientific truth. He also emphasized the role of universities as “ideological weapons factories”—places where people gather to develop these ideological weapons under the guise of so-called value-free scholarship.

The second day of the symposium was concerned with environmental issues. The afternoon speaker, John Vandermeer, a University of Michigan ecologist, talking about “ecological determinism”, (see article in this issue) summarized much of what is wrong with current popularizations of the “ecological crisis”. He noted that the ecological crisis is potentially one of the most revolutionizing of current human problems, yet it became co-opted in the late 60’s by supplanting the needed analysis of necessary structural changes with the all encompassing rubric “the population crisis”. He then critically analyzed the more recent liberal and reactionary programs for limiting populations.

In the evening Murray Bookchin, a writer on ecology and anarchism spoke on “The domination of nature: its social origins”. Bookchin traced the historical evolution of social views on the functioning of nature, emphasizing the fact that the ambient social and material relations of a particular time dictated the manner in which humans viewed nature. These views of nature, in turn, are used to justify existing social structures as “natural”. He went on to analyze contemporary society’s urge to control and dominate nature as an out-growth of industrial capitalism and its tendency to treat all things—including nature—as commodities.

The third day of the symposium was devoted to an analysis of sex roles. Robin Jacoby, a University of Michigan historian, presented an historical account of the development of ideas relating sex role differences to biological differences. She made it clear that most of our present day attitudes on the biology of sex stem from Victorian rationalizations of the role assigned to middleclass women. In the evening Pauline Bart, a University of Illinois sociologist, discussed various sociological aspects of sexist ideas, especially those relating to the attitudes of the medical profession towards women. She touched upon menopausal depression and the “menstural stress syndrome”, pointing out how men have stressed these in order to prevent women from attaining respected positions. In addition, she criticized a recent book analyzing “natural” sex roles in the kibbutzim, calling attention to the fact that the economic development of the kibbutzim forced women back into traditional roles. 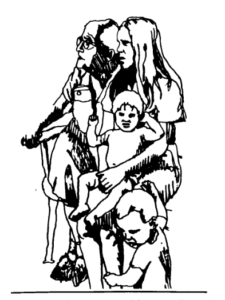 Human aggression and competition were discussed on the fourth day of the symposium. Richard Kunnes, an Ann Arbor psychiatrist, presented the “political determinants of violence”, pointing out that most contemporary concern centers on acts of individual violence rather than acts of institutional violence. He went on to analyze how institutional violence is a structural necessity of capitalist society and how capitalist ideologues divert attention from this violence by stressing the behavior of individuals. In the evening presentation, Ashley Montagu, an anthropologist and author, provided an excellent review of Konrad Lorenz and Robert Ardrey. He showed how these arguments are false and are based on a manipulative use of archaeological and anthropological data. Finally Montagu pointed out how the innate aggressionist viewpoint deflects attention from the real causes of aggression.

The fifth day’s lectures concerned intelligence and heredity, and the use of the supposed relation between them to justify racism. Art Schwartz, a mathematician at University of Michigan, criticized the concept of intelligence and its “measurement” by I.Q. tests, showing that both the statistical assumptions and the data used to estimate heritability are biased in favor of hereditarian arguments. He also reviewed the early use of I.Q. tests in America to stigmatize immigrants as “feeble-minded”. In the evening, Val Woodward, a University of Minnesota geneticist, criticized the race-and I.Q. arguments as “Scientific Racism”. He placed in historical and social perspective Jensen, Shockley, and others who misapply the principles of genetics to lend scientific respectability to racial supremacists arguments, emphasizing that it is not the Jensens and Shockleys who are the primary villians but the class ruled society which creates them.

The symposium was offered as a University of Michigan mini-course and advance publicity was centered around the university community. Those who enrolled in the course attended the lectures, workshops, and a special weekend retreat. The retreat was held off campus and provided the opportunity to discuss ideas raised during the previous week. During the week-end, those who attended the retreat not only analyzed the basic deterministic arguments but developed strategies for combatting them. Outlines for both high school and college courses in biological determinism were prepared. Having the retreat off campus enabled those attending (undergraduate and graduates) to temporarily forget their normal academic pressures and devote their full energies to the purpose of the retreat.

All presentations were well attended (the evening lecture attendance ranged from 250-500), and discussions and workshops were held in each session. We consider it of great importance to make the information presented during the symposium available to a much larger audience. All lectures were tape recorded and we are now negotiating with the Pacifica radio stations and National Public Radio to have them broadcast. Any group that would like taped copies of the lectures should contact us. Each of the speakers prepared a manuscript which we intend to publish as a Science for the People report. Several publishers have expressed an interest in publishing it.

Partly in response to the symposium, we have quadrupled the membership in our local chapter and have divided into 5 issue-oriented subgroups. The “Sociobiology” subgroup is in the process of developing a critique of E.O. Wilson’s new book on sociobiology (see SftP, Nov. 1975,) and will respond to the many articles which are being written in the national press praising his book. A fuller report of chapter activities will appear in the March issue of the magazine.