Last May the Science Teaching Group was asked to participate in the Great American Food Act, a festive day on the Boston Common, devoted to the food crisis. In line with other current crises, in ecology, energy, war, and unemployment, this year it was food. We wished to expose this crisis as symptomatic of the capitalist system we live in. We wanted a political analysis of the food industry and its related technology, making the point that technological progress in this area is to increase profits and not to improve the quality of food. Our aim was not just to give facts, but to present an argument-to teach. Our classroom was now outside, and students were suddenly parents, children, and old people from diverse backgrounds, races and classes. Surely, conventional methods would not work.

One thing we all have in common is that we have to eat. On a more complex level, we are all consumers, meaning that we pay to eat. In this system of free enterprise, prices are set by the market, but the market is not “free” when you see Elsie’s face stamped on two-thirds of milk produce. One way of showing this would be to dramatize a history of markets. We chose the Borden Corporation as representative of the expansion of agribusiness. Furthermore, cows are symbolic of wealth in many countries. The facts of history speak boldly for themselves, but in the tradition of street theater we had to be funky-provocative, but not obnoxious, didactic or dry. How we did it was to build a cranky called “The Saga of Jake and Elsie, the $1,000,000 Cow.”

A cranky is basically a paper movie, with a person turning a crank instead of a machine. It is a simple wooden frame with an inserted roll of paper that unfolds to tell a story. The size is mostly determined by the paper available and its use. It can be as small as paper toweling or be large industrial sheets. The cranky frame can be screwed onto a small step ladder or just rested on a flat surface. The pictures can be drawn to fit single frames or can be made to flow continually. There are times when the pictures stand alone, without script, so they should be colorful. For “special effects,” people have found creative ways of cutting holes in the paper so one can stick things through, such as puppets, fists, fingers, etc.

A cranky is definitely stylized street theater, but as the focus is on the pictures, far less intimidating to perform. It doesn’t require experienced acting, just a strong voice. The only essential person is the cranker who can also be a character or narrator. The only other requirements are color, good words, ideas and noise, preferably musical noise. Speaking from experience, I will only add that the spirit of a cranky lies in how the group works together and in the power of the truth exposed by the story line, preferaby comically.

There were five people in our group, three genetics teachers and researchers, and two students. With one exception, none of us had ever acted no less written, directed, or drawn pictures for a cranky. Having no central place to meet, we used laboratories for script sessions, people’s hallways for laying out hundreds of feet of butcher paper, and kitchens for rehearsals. I was amazed by how well the group handled the difficulties of writing a script. I mention it because plays are normally concieved by one person, and authors consider it a personal creation. In this case it was a truely collective effort, with the multiple authors drawing on ideas which evolved from discussion. Towards the end we had a script and a list of picture ideas but nothing was drawn. We were reluctant to go outside our group for professional artistry, but resolved this by doing at least the preliminary sketching, involving an allnight session to produce 24 frames stretching over two rooms, drawn by 7 people. Throughout the process, we attempted to define our politics where differences had to be dealt with. The cranky not only produced an analysis of agribusiness, but taught us how to work together.

Our story started simply. Jake a small farmer owns a cow. He is self-sufficient, largely consuming what he produces. But with the advent of money and the division of labor, Jake can only survive by entering the market, where competition forces him to strive for greater efficiency and “productivity”. He needs milking machines, and as with most small farmers, has to deal with a local business man “Mr. Bore-on” (the villain). Prolonged payments put Jake in debt, and as with 70% of all small farmers since 1930, he eventually loses his farm.

“Bore-on” is also forced to expand. It is in the nature of the system to need to expand and diversify. He now not only makes natural products from milk but also glues, leather, paints. (Today the Borden Corp. produces Krylon Paints, toiletries, Wise Potato Chips and other snack-pack foods. Jake’s cow has evolved into Elsie, the $1,000,000 Cow. Jake is now being milked by that cow).

Our hero is left with no alternative but to become a city worker and consumer. He works at a Bore-on supermarket, stuffing different colored boxes with the same detergent. Not happy, he starts helping customers by warning them off bad deals. On the advice of “Super T” (“T” for technology), Bore-on increases his profits by stream-lining his operation technologically. Jake now stands on unemployment lines. As an unemployed consumer, he discovers the new code lines for computerized pricing on the supermarket food containers. (They are currently on everything but fresh produce. It is the next step to push-button consumption). He adds an extra line of his own to one of these codes, the confused computer charges him nothing, and Jake is getting free milk again.

He is caught and prosecuted, allowing us, in this scene, to confront the arguments of the system – that Jake is just an isolated greedy individual, that the answer to the food crisis lies in automation, etc. We made the points that the direction food technology is going in disregards hunger completely, that it works in the interest of the few who hold monopoly (or oligopoly) power, that its use is to control price, not to increase protein production. 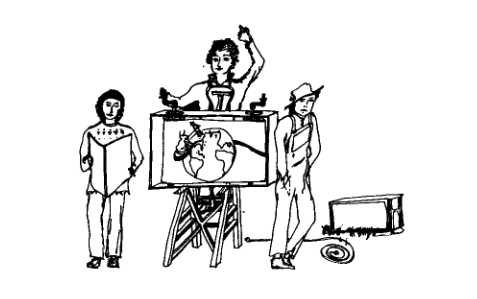 This brought us to the most difficult and weakest part of the production, —the kind of action to suggest. It is much easier to explain how exploitation and power works, using heros and villains, than to tell people what to do about it. We touched on individual remedies like food stamps, and limited collective action like the food coop movement and the support of the farm workers’ struggle, but feel that small actions like these mainly lead to a greater understanding of the struggle ahead of us. What’s needed now is education about a complex, obscured mass of contradictions, and this the cranky mainly attempted to provide.

Our presentation was effective that day on the Boston Common but we were largely articulating and reinforcing what most of our audience knew or agreed with already. When we attempted the same presentation on two occasions in front of supermarkets, we were confronted with less responsive audiences, partly due to adverse environmental conditions, such as noise, traffic, angry supermarket managers, and partly to the novelty of the approach to people bent on buying food in a hurry. We’ll have to modify the approach to the general public, perhaps by focusing on a particular topical food issue, We feel the cranky technique could be a good teaching aid in the classroom, to generate discussion around agribusiness as well as other topics not dealth with in the standard curriculum using the standard visual aids.

On the day of the Food Fair we proved once again the political effectiveness of drama as an oraganizing tool, and particularly of comedy, parody and satire. Our cranky taught through a lively interchange between actors and pictures, pictures and audience, audience and actors. A simple technological device accessible to all, it can be a versatile and powerful means of education and persuasion about the politics of science.