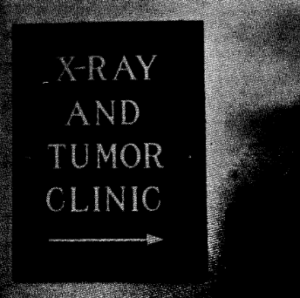 That exposure to chemicals leads to cancer in humans has been know for two hundred years. In 1775 a British physician noted the high incidence of cancer among chimney sweeps, and correctly attributed it to their exposure to coal tar and soot. Since then a vast body of evidence has accumulated showing that many industrial chemicals are powerful cancer-causing agents—carcinogens—in animals and humans. The evidence from epidemiological studies shows that the incidence of different kinds of cancer varies markedly depending on where one lives and where one works: on the other hand, there is very little evidence that cancer can be “caught” from someone who has it. So, if you work in an asbestos factory, (for a review on asbestos see Science for the People, September 1975) a plant processing vinyl chloride or aniline dyes, or if you are a very heavy smoker, your chances of getting a cancer are far higher than if you were not exposed. In certain dye factories every worker employed at certain jobs eventually contracted bladder cancer.

Not all carcinogens are of industrial origin: some are naturally part of our food, others are food additives. For example, it seems that the Japanese stomach cancer was caused by the talc used to render the rice agreeable to Japanese palates. Cancer of the liver, very frequent in South Africa, is corrolated with the presence in the diet of a high level of aflatoxin B1, a toxin produced by a common African mold.

The term cancer describes a condition in which some cells of the body are reproducing themselves in an uncontrolled fashion, relative to the normal process. Exposure to a chemical may result in changes in cell replication if the chemical causes mutations in the genetic material and alters the cell’s natural growth processes. As discussed, below, there is now considerable evidence that many if not all carcinogens do cause mutations. However, in recent years, much emphasis has been focused on viruses as a cause of cancer, and most of the National Cancer Institute basic research funds have gone into tumor virology. Despite this effort, the role of viruses in human cancer has remained unclear. It is clear that some types of cancer do not have environmental causes. In some types of leukemias the presence of viruses has been demonstrated recently. Their role is still unknown, but could be quite important if the situation is similar to that found in animals.

The virus cancer program was a product of the Nixon administration and seems to have distracted attention from such important causes of cancer as exposure to industrial and environmental carcinogens. The virus work focused on curing cancer, rather than preventing it. Given that according to the World Health Organization more than 80% of human cancers are due to environmental and industrial carcinogens, the incidence of cancer should be reduceable by a factor of 5, by preventing these noxious agents from being introduced into the environment.*

Furthermore, as mutagens, the carcinogens can have other serious deleterious effects by acting on the cells of the reproductive system (egg and sperm), inducing changes transmitted to the next generation in the form of possible genetic diseases or leading to miscarriages if the defect is too serious for the fetus to survive. This is another strong reason to try to eradicate them from our environment.

As a result of lack of attention to chemical carcinogenesis, very little effort was put into identifying chemicals that caused cancer. Rather efforts were put into finding agents which cured cancer. So, it may be a little less surprising that the development of a powerful general method of checking compounds for possible carcinogens, developed as a side project of a California molecular geneticist Bruce Ames. Ames worked with bacteria, and routinely used compoounds that caused mutations, to produce altered strains of bacteria with which to study the nutritional requirements of the bacteria. He became concerned about food additives, and their efforts on humans. Persuing this project, he began developing tests utilizing his bacterial strains, to test whether the food additives were mutagenic. This was the start of what is now a major departure for cancer studies. The biological details of the Ames test are as follows.

Variants of bacteria (Salmonella typhumurium in this case) have been developed which have a nutritional deficiency that renders them unable to grow. The variant bacteria and the chemical to be tested are allowed to interact. If the chemical has mutagenic properties, a mutation may result which restores normal bacterial growth properties: the bacterium and its descendants will have lost the nutritional requirements and therefore will be able to grow. Ames group has developed a battery of different bacterial variants which are permeable to chemicals and highly sensitive to mutagenic agentss and which can respond to all possible mutagenic interactions known up to now.

Some chemicals become carcinogenic as they are transformed by the body’s processing (metabolism), that is, only after adsorption in the body (through skin contact, eating or breathing). Such metabolic transformations occur mainly in the liver; transport through the body brings all the metabolic intermediates as well as the unmetabolized raw materials to the urine. The urine therefore, is a good source to look for potential carcinogenic or mutagenic materials. The metabolic transformations of chemicals can also be performed in the test tube by exposing the chemicals to liver extracts which contain the enzymes involved. 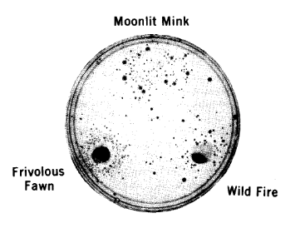 In practice, the test used plastic plates filled with minimal nutrients for bacteria in agar gel; the variant (nutritionally deficient) bacteria are spread at the surface of the plates; the chemical to be tested is placed in the center of the plate and diffuses outward. Urine of people exposed to chemicals can be used as well as chemicals mixed with rat-liver extracts. If the test is positive, bacteria that have been mutagenised during the incubation will appear as a halo around the center, at a distance where the chemical is sufficiently dilute to allow bacterial survival. If the chemical has no mutagenic properties, the plate will remain bare. The test is very easy to interpret.

Years of research in Ames’ laboratory have allowed his group to optimize the conditions for the test and demonstrate that most known carcinogens are revealed by this test. More recently, they have started to analyse new chemicals. Their effort on cosmetics have shown that 63 out of 65 hair dyes tried are carcinogenic… 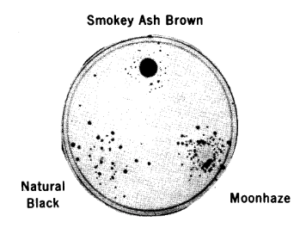 Because of its success rate, this is a very good test to use in a first step. The ease of this testing procedure really makes it possible to test all new compounds, for example the hundreds of new compounds produced every year by industries.

There are other tests available. All of them are more cumbersome than the bacterial test. The most currently used in the western world (including USSR) are the following:

The dominant lethal test: In this, a male mouse is treated with the compound to be tested and mated after the treatment. The pregnant mice are opened early during pregnancy and analysed for the presence of dead fetuses (Moles). The main problem with this test is that spontaneous moles are quite frequent in mice.

The host mediated microbial assay: This test uses the same tester strains as the rapid bacterial test. The strains are injected in the peritoneal cavity of an animal exposed to a compound to be tested. This testing procedure was in use before the refinement of the rapid test and is less efficient.

Somatic cell cytogenetics: Mice are exposed to compounds to be tested and their lymphocytes (such as bone marrow cells) are examined for chromosomal anomalies. Chromosomal aberrations have also been observed in the lymphocytes of vinyl chloride workers.

These three tests which are much easier, faster, and cheaper to use than the animal cancer test mentioned above and are not absolute in their ability to reveal carcinogens and mutagens. At this point there is no absolute test capable of revealing them all. In particular, because the Ames test is only 85% efficient, no compound that passes that test can be used safely before further testing. On the other hand, the 85% positive fraction should be taken out of the market or prevented from entering it. In this regard the approach of the FDA is somewhat alarming. They have proposed a “tier” system where compounds get tested in the rapid test at a first level. Those which appear to be active are then taken in a second step to a mammelian test to see whether they can also be mutagenic to mammals. If this proves to be the case, they may be taken to a third step for a risk assessment, when a compound proves indispensable or can not be taken from the environment. Note that most cancer chemotherapeutic drugs would fall into this last category. It is however surprising that these guidelines seem to protect chemicals rather than us. We see no word of caution for chemicals that may have been missed in the first step but that on the contrary there is a reluctance and further testing of chemicals which are exposed by the first step…

The FDA says that the difficulty about mutagenesis is not a problem of laws but one of adequate scientific knowledge and interpretation.

Maybe the most positive aspect of the Ames test is the ease with which it can be performed. It gives us a way to get some control over our environment, because for once the test can be learned with very little expertise. Recipes and tester strains can be obtained from Bruce Ames. The set up requires some means to sterilise and a small incubator: For example all high school labs are equipped sufficiently. In fact the test has been tried successfully in high school. In this regard, a practical and most rewarding aspect is its application to health hazards encountered in work places. In principle, the urine of a whole factory population could be tested for the presence of mutagens and carcinogens in less than a week, by a few people and with a financial burden of a few hundred dollars. Thus the Ames test opens up a new arena for attacking industrial carcinogens. For example organized workers in unions can now readily demand in contract bargaining, large scale screening and public disclosure of the results as part of their defense against these hazards.

By directing considerable effort into this offshoot of their main research line, the Ames group has made a real contribution to attacking concretely, the problem of cancer. This is an approach to doing science, science for the people, which should be duplicated in many other areas of research.

*It seems appropriate to mention in this context that the most frequent type of cancer among American males is the caner of the lung, which can be attributed mostly to cigarette smoking. ↵

Science Teaching: The Cranky in Radical Teaching
Milking Profits Out of Cows