About This Issue and others 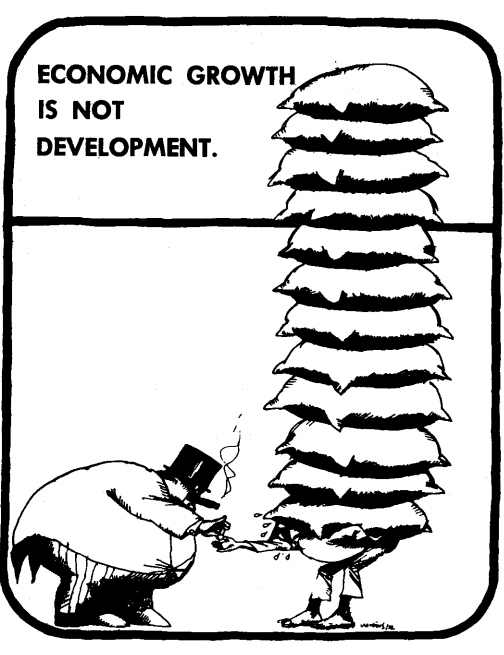 The overall direction for each issue of the magazine is provided by the “Bagholders”, members of the editorial collectives for one year past. The Bagholders also organize new editorial collectives. For this issue with an eye to the meeting of the American Association for the Advancement of Science (AAAS), June 20 – July 4 in Mexico City, the Bagholders chose the theme “technology and imperialism”. What follows are some reflections on the particular relevance of this focus today.

There are inspiring lessons in the Watergate phenomenon: one is, how fragile the legitimacy of Power is in America, such that when the sacred “electoral process” is briefly compromised in appearance, there is a flurry of cleansing behavior on the part of all concerned institutions, including both parties. Then, there is the widespread and intense interest in the unfolding of this “crime”. Of course, there has always been appropriate cynicism about politicians, but one gets the impression that, if the daily routine crimes of the power holders were given similar, detailed exposure, there would soon be a popular basis for some dramatic change in America. By “routine crimes” we mean for example the continuing U.S. occupation and decimation of S.E. Asia, the massive cut-backs in health and welfare programs of all kinds, the continuing sexism and racism in all major institutions, a programmed inflation/squeeze, and the general misdesign of priorities. All of these, affecting most people, are routinely handled as calculated moves· in the service of Business, friends, and the rich in general, with at best some grumbling from some Congressmen.

Therefore, we are proposing that the process of development and the particular role of technology are another area of concealed crime. In this issue we examine how technology and imperialism go hand in hand in the service of U.S. corporate developers. (The same points can also be made about corporate developers from other. industrialized countries.) Contemporary science and ideology argue that the development process is in great need of technological innovation and refinement, supplied by the “advanced” countries.  In seeking to propagate this claim, organizations such as the AAAS argue as though technological advancement and development are neutral processes, and they take the view that “more” is synonymous with “progress”. We will try to show how false this notion is; that the consequences of “development” depend on who the developers are, that technology and class ideology are considerably interwoven, and that development under global capitalism is really misdevelopment.1 Our view is that we must change the social structure to create a new role for science and technology that serves all the people without exploitation.

The article on patents and technological dependence examines some of the legal relations between technology and imperialism. The conception of technology as private property means that the direction of that technology is determined by the international corporations which hold the patents. The article on environmental colonialism describes some of the consequences, in this case for the people of Puerto Rico, of submission to the capitalist notion of “development”. The analysis of the AAAS meeting in Mexico City provides a picture of the role such societies play in this process. It has been rumored that the AAAS chose Mexico City to counter flagging member interest in the usual fare of AAAS annual meetings. However, as this article shows, there are other more important reasons for such a meeting.

Castro’s speech and the article on agriculture in China (excerpts from a draft chapter of a book to be published soon, written by SESPA people who recently visited China) relate, in contrast, a different picture of development — one of self-sufficiency, with participation, control, and support of the people. While there is some disagreement about how far China and Cuba have actually departed from the traditional capitalist mode of development, many of their achievements are nevertheless stunning contrasts to the rest of the “developing” or “developed” world.

The articles on motivation ideology and women’s biology relate to “science” itself as a tool of imperialism. Technology is not always in the form of machines; sometimes it can take the form of ideologies developed to justify the exploitation of the many by the few. Such systems of manipulative ideologies become especially insidious because in this case we are all colonized by our oppressors; the system, in the form of its justifications, resides within us in much the same way as a colonizer inhabits the colonized country.

FUTURE ISSUES: An effort is being made to plan the focus of SftP issues sufficiently in advance to encourage discussion and the writing of articles. Some of the topics which are being considered include the following: THE ENERGY CRISIS, looking into many aspects; THE EXPLOITATION OF STUDENTS, in a variety of educational contexts; POLITICAL STRATEGY FOR PROFESSIONAL MEETINGS, including review of past activities of different organizations and plans for the future. Anyone interested in contributing is encouraged to contact SftP so that there can be coordination of plans, circulation of drafts etc., and thus a better magazine.

Cover: This Great People has said: “Enough!” and has begun to move …

Criteria for acceptance: SESPA Newsletter, predecessor to Science for the People, was pledged to print everything submitted. It is no longer feasible to continue this policy, although the practice thus far has been to print all articles descriptive of SESPA/Science for the People activities.  Considerably more discrimination is applied to analytical articles. These are expected to reflect the general political outlook of Science for the People. All articles are judged on the basis of length, style, subject and content.

Editorial Procedure: The content of each issue is determined by unanimous consent of the collective. Where extensive  rewriting of an article is required, the preference of the collective is to discuss the changes with the author. If this is not practical, reasons for rejection are sent to the author. An attempt is made to convey suggestions for improvement. If an article is late or excluded for lack of space, or if it has non-unanimous support, it is generally passed on to the next collective.