Where have all the jobs gone? Have they been lost to the Japanese competition? In part, but not nearly so much as we’ve been led to believe.

At this point American manufacturers themselves pose the greatest threat to jobs. They are automating at home, and with the help of foreign aid they are continuing to shift their labor-intensive (high employment) production outside the U.S. to Korea, Hong Kong, Taiwan, Singapore, and Mexico.

The shift is not new, but the job loss was hidden by the inflationary economic boom of the Johnson era.

Look at the back of your portable radio or TV—even if the brand-name is American—and you’ll probably find “Made in Japan,” “Made in Hong Kong,” “Made in Taiwan.” 70% of all radios (close to 90% of all portables) sold in the U.S. are imports. We import 52% of our black-and-white televisions and a growing percentage of color TV’s.1

This trend began in the late fifties, when the Japanese purchased American technology, starting with the transistor, and adapted it to produce consumer goods never considered by U.S. manufacturers—the portable radio and miniature television. During the sixties, the U.S. radio-TV industry caught on, but had difficulty competing with the Japanese, who paid wages less than half that paid American workers. Only in producing new products, specialized equipment, and sophisticated devices did the U.S. maintain a competitive edge.

Unable to compete effectively with Japanese imports, U.S. manufacturers arranged purchasing agreements with the Japanese. U.S. firms sold technology to Japanese firms and marketed the Japanese products as their own. 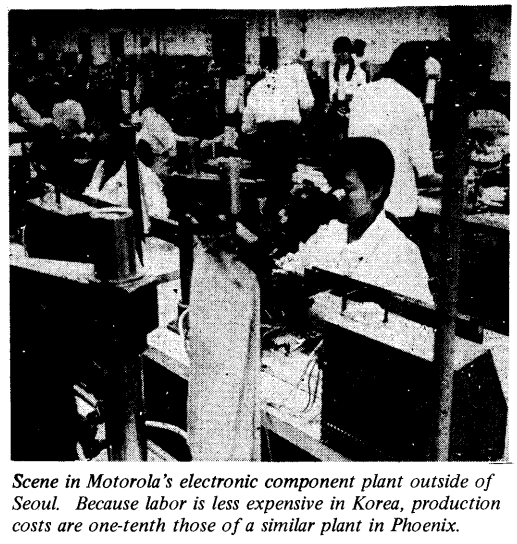 In the past five years American manufacturers have adopted a new strategy: the runaway shops. They still do their research, development, and design in the U.S. but they are shifting increasing proportions of production and assembly overseas to take advantage of low wage rates.

This strategy has been so successful that Edward Reavey of Motorola reported in April 1972, that “More exports (consumer electronics imports) are coming from Taiwan today than Japan, so we’re beating them at their own game.”2 Mr. Reavey may have been a little optimistic, but the trend is clear. Many Japanese firms are beginning offshore production to meet the competition of the runaways.

In the semiconductor industry, manufacturers have established runaway shops to meet domestic, not Japanese competition.

The technology for the manufacture of semiconductors is advanced and rapidly changing. The industry is extremely competitive: new companies are always entering the market; old ones often fail. Since U.S. firms hold a large but declining technological edge over the Japanese, competition has chiefly been between U.S. firms.

The second step, assembly of connecting wires and testing, uses cheap, unskilled labor—usually women. Since transportation costs are low for high-value miniature components, manufacturers have been able to set up assembly lines in remote areas where labor is cheapest: the Far East, Mexico, and American Indian reservations.

Some 20,000 to 50,000 workers are employed in foreign semiconductor manufacture for U.S. corporations. Some workers in the U.S. are involved in the capital-intensive fabrication or processing of semiconductors which are assembled abroad, but not nearly so many as those employed abroad.

Import competition and runaway shops have an obvious effect on American workers: they have a harder time getting jobs in the electronics industry, despite the growth of sales. U.S. employment making radios and television receivers fell from a peak of 195,000 in November, 1966 to 140,000 in December, 1971. In December, 1971 341,000 had jobs manufacturing components, as opposed to a peak of 397,000 in October, 1969.4

By hiring fewer, but more-skilled workers, electronics producers are expanding the gulf between rich and poor within the United States. Skilled and professional employees get higher wages as productivity rises, while assemblers are threatened with wholesale lay-offs if they demand higher wages. Since the less-skilled assembly workers tend to be women and non-whites, current inequities are reinforced.

The job shift also hits older workers. While young workers who get laid off can often find new work by moving to new homes or by retraining, older workers—many of whom have toiled in electronics for their entire adult lives—have great difficulty finding new employment.

In the long run, the de-employment of electronics—in fact, most manufacturing-forces the government to subsidize more and more of the economy to provide jobs.

As the workforce shifts into service industries, manufacturing unions will lose their power and newer service unions will grow. The new unions—especially public employees’—will have a hard time establishing bargaining strength equal to that of manufacturing and construction unions.

Runaways also hurt the nations where they set up shop, although they often benefit the local ruling groups which invite them in. U.S. manufacturing investment in underdeveloped countries may raise overall production, but usually it appears to aggravate the existing differences between rich and poor.

The most important aspect of runaway shop development is that it increases the host nation’s dependency upon U.S. or Japanese corporations for technology, parts, or marketing. This dependency gives American and Japanese elites control over the economic policies of the host nations. If the hosts don’t go along, the companies can shift production—which requires few machines—elsewhere.

Foreign business also diverts investment capital—and often the most talented managers—away from industries better suited to raising the standard of living of the native population as a whole, as local investors invest in the parent multinational corporations or in companies which serve or supply the foreigners.

Are runaways and the problems they cause necessary? To defenders the answer is a simple yes. Runaway shops, they claim, are a natural outgrowth of the structure of international trade.5

The structure of trade, however, was made by men, not nature. 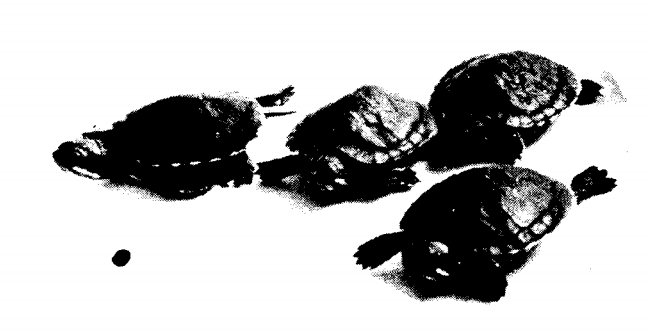 They have used military intervention and aid to create regimes sympathetic to U.S. investment in Taiwan, Korea, and the Philippines. Should the U.S. win in Indochina, Vietnam will be the newest center for cheap electronics assembly.

They have used police and military aid to help Asian client governments to repress trade unions. In Taiwan and Korea at least, U.S.-trained-and-equipped police forces enforce bans on strikes.

And in many Asian nations, they have concentrated on more subtle forms of control. The Ford Foundation, in conjunction with the U.S. Agency for International Development (AID), has for many years pursued a strategy of elite-building. Ford and AID bring promising Asians to the U.S. to study the American way of conducting business. Upon returning and assuming leadership roles, they listen approvingly to American strategies of development, such as “export-promotion”—tax and tariff incentives for runaway shops. In Indonesia, where the government recently began to seek runaway investment, the entire civilian ruling group is known as the “Berkeley Mafia” for its training at the University of California.

They have worked hard to provide “infrastructure”—transportation, communications, training water, and energy resources—to support industrial development. AID, the World Bank, and other agencies run by U.S., European, or Japanese businessmen have even gone so far as promoting the construction of industrial estates (industrial parts), with factories prefabricated to meet the needs of foreign manufacturers. In Korea the United Nations Development Program has supported the “Fine Instruments Center” with $1.2 million since 1967. The Fine Instruments Center is the semi-governmental agency responsible for recruiting foreign investors in electronics.

They have even promoted the overpopulation of urban areas—a cause of cheap labor. In many nations they force people into cities through the Green Revolution, which replaces peasant labor with machinery and herbicides. In Vietnam they urbanize, quite consciously, through bombing. 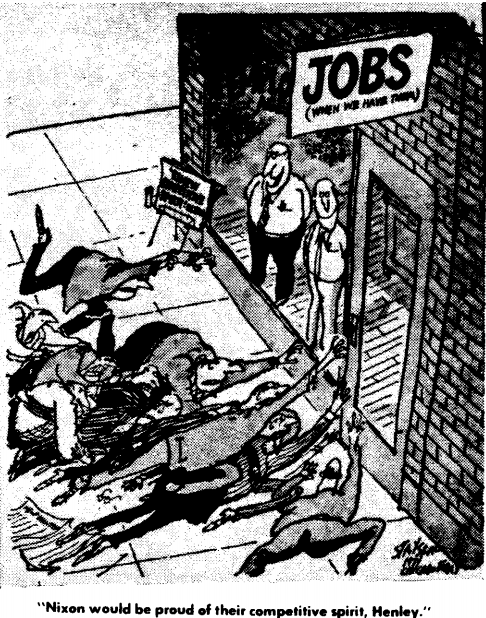 Organized labor, angered at the loss of work in the U.S., has attacked industry’s decisions to license technology, shut plants, and invest overseas. The AFL-CIO is pushing Congress hard for the passage of the Hartke-Burke “Foreign Trade and Investment Act of 1972,” which would severely restrict foreign trade and investment.

But protectionism is not the answer. Labor’s offensive may pressure administration negotiators and strengthen the U.S. hand in international trade talks, but the adoption of the Foreign Trade and Investment Act would precipitate a major trade war with other industrialized powers, cutting exports as well as imports and thoroughly disrupting the American economy.

On the other hand, Labor has consistently supported a foreign policy which systematically promotes runaway shops in Asia. The AFL-CIO has staunchly backed U.S. military involvement in Korea, Taiwan, and Vietnam. The AFL-CIO has cooperated with government and the foundations by training Third World union leaders in American methods. Though there are no runaway shops in Cuba, China, or North Korea, Labor’s foreign policy literature is still virulently anti-Communist.

If American workers are to protect their jobs successfully against the runaways, then they must find a new leadership which identifies the source of their problem—U.S. foreign policy—and directly attack the foreign-policy dominance of the multinational business community.