SESPA — CPP at the Democratic Convention

Although the conventions and even election will be long past by the time most people read this issue, we include the following account of the combined CPP (Computer People for Peace) and SESPA presence at the Democratic Convention in Miami in July, as a kind of diffused chapter report and an example of valuable cooperation between like-minded organizations. It consists of random recollections from two widely-spaced (geographically) members of this ad hoc group. 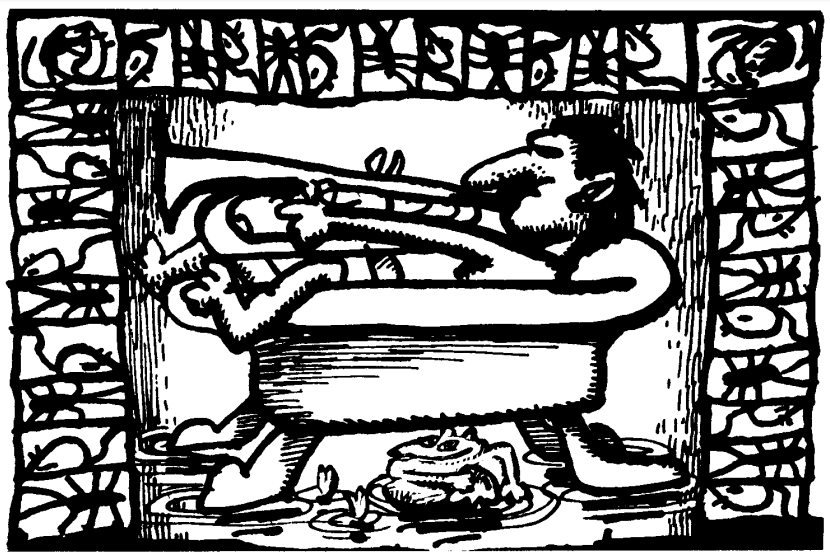 Lorraine—We arrived in Miami on the Saturday night before the convention, after two gruelling days on the road, a grimy quintet from Boston SESPA (me), from D.C. SESPA (Dan), from New York CPP (Paul and Laird) plus Juan, a student McGovern worker. The night before had been great—impromptu, comradely hospitality at a drug half-way house in Fayetteville, N.C., home also of the 82nd Airborne, which had been sent on ahead, to Miami, to welcome us there. The drive the next day was hard, though, with lvts of ideological, and not so ideological, struggle going on in the car.

Laird—The ideological struggle in the car was over the radical role of science and technology, and broke down along organizational lines. Agreed that science and technology were universally misused by imperialism and the corporate state, at present, we disagreed about potential. CPP (members present) took the position that technology was inseparable from imperialism and had to be checked or destroyed until a revolutionary state was created. The SESPA people argued for continuing use of science and technology from a radical perspective. We traced much of that disagreement to SESP A’s base in universities and CPP’s base in corporations. Dan took strong exception to this, pointing out that SESPA-D.C. is almost entirely non-university based. Anyway, we agreed that our immediate objectives were to participate in the People’s Expose (of the Indochina War) being sponsored by the Miami Conventions Coalition, communicate with McGovern delegates about our concerns over the use of technology in the war and the role of corporations in the war, peddle our literature to delegates and other interested people, participate in the actions and demonstrations planned, and swim a little. By Sunday night we had accomplished all these objectives.

Lorraine—Sunday was great! Miami looked just the way it’s supposed to. Refreshed from the road by a night on the floor of a CPP member’s commune in Miami, the MBSTW(M)C fMiami Beach Scientific and Technical Workers (Motley) Collective] advanced upon Flamingo Park to get the lay of the land. The Land (as the park came to be known to its inhabitants that week) was alive—with Gays, Zippies, Jesus Freaks (praying or reading from the Bible, aloud), capable and determined VVAW’s, guitars, dope, Legalize Marijuana’ers, plus political heavies like SDS, Miami Women’s Coalition, SCLC, PL, Farm Workers and us. It was a circus, but with a core of dead serious, determined dedication. We contacted the Miami Coalition about our arrival, and then went swimming.

Laird—We set up a literature table in front of the Expose tent and started selling and giving away CPP and SESPA literature. We went on an action that evening at the Playboy Plaza Hotel, called jointly by SDS, PL and the Miami Women’s Coalition to protest the Sponsors’ Dinner (served by Bunnies) for Democratic Fat Cats, to honor Henry Ford. It was a good tight action, with about 200 people militantly and non-violently blocking access to the hotel until the police moved in. There was no confrontation. We then picked up a 19-year old McGovern delegate from Michigan and rapped with him for a couple of hours over dinner about technology and politics and got him to agree to bring some of our proposals up on the floor, proposals regarding weather modification warfare, bringing all war technology out of S.E. Asia and corporate reparations. We attended a demonstration-planning meeting to plan Expose and delegate workshops (an idea later dropped) and we ran off a leaflet we had written to distribute to delegates. We returned to Miami for the night feeling like we had had a very good day.

Monday morning we returned to the Land, prepared to move in and camp there for the rest of the convention.  We again set up our literature table and the CPP Automated Battlefield computer exhibit as part of Expose. We went on the Anti-Imperialist March to Convention Hall. The demonstration, about 1500 strong, marched through Miami Beach streets in a complete absence of police forces and with the sympathy of most residents, calling for an end to U.S. imperialism in Asia, Africa and South America. The afternoon was largely wasted trying to get to a youth caucus meeting of delegates which never came about. In the evening, we concentrated on Expose and our table, the only political table in the park except for PL and SDS. We missed the Poor People’s March which wound up with a small band of white youths breaking away and tearing down a section of the fence surrounding Convention Hall.

Lorraine—That night, Monday, the first night of the convention, Paul and Laird took part in attempts to coalesce, politically and socially, some of the disparate groups in the park, and counter the increasingly disruptive and openly fascist ideology and tactics of some of the Jesus groups present. These groups ended up exposing themselves. There was also the question, raised in our group as well as the larger one, of SDS and PL trying to take over, along with the usual absence of serious consideration of the content of their positions.

Laird—After a night of little sleep, since on the Land everything but sleep happened all the time, we determined to spend most of the day there with our literature table and Expose. The Yippies moved next to the Expose tent to solidify a political center for the camp. Expose was fully organized for the first time. It was contained in a huge circus tent donated by Dade County. The CPP Automated Battlefield Computer was spread out on top of the tent. Inside were exhibits from Project Air War, Vietnamese paintings and cultural history exhibits, and a set of posters made by Tom Hayden and the Vietnam Resource Center. The Expose drew thousands of tourists, delegates, campaign workers and camp people for a heavy political education experience. Everyone who came by went in curiously, perhaps sceptically, and came out very quietly. Expose was such a hit that we had to keep it open to 3 AM before people stopped coming. Beside the tent was a sound stage with a non-stop political program involving every group in the camp.

Lorraine—Expose was terrific and a perfect focus for SESPA and CPP literature enlarging on the technology and science tie-in with the war and opening up to the larger area of science’s use under capitalism and its current stage of imperialism. The streams of people were endless, we lost track of time about midnight and forgot our fatigue in the exhiliaration of talking and listening to so many. Our collective had expanded by this time, adding Norman (SESPA-Utah), Esther (SESPA-Boston) and Jennie and Elliot (SESPA-D.C.). Dan and Esther made a sortie to sell magazines and spread the word at the local Florida Atlantic Univ. campus, two blocks from the Land, and Jennie and Elliot handed out leaflets and contacted delegates.

Laird—We kept the literature table up all day and almost used up all our literature. Norman and Lorraine spent the afternoon leafletting and rapping with McGovern people at the Doral. In the evening we marched with the camp to the convention hall, skipped the anti-racism rally and and distributed our leaflets to about 1000 delegates as they entered the convention hall. Paul and I stayed up almost all night with the Expose tent and helped out with camp security.

Wednesday morning, we attended a ‘Grass Roots McGovern Workers’ meeting, called by McGovern staffers who were concerned about his changing positions on the war and other issues they had worked very hard for. We leafletted and rapped with them about technology, corporations and the necessity of a strong anti-imperialist campaign.

Lorraine—At this Grass Roots thing, we got one of the best breaks of the week, as far as media exposure goes. Laird suddenly found himself on camera and was seen on CBS news that night, giving a terrific rap about the war, technology, computers and a warning to McGovern, from the people on the Land, not to renege on the withdrawal issue. We also viewed a typical exercise in liberal parliamentarian paralysis, as the assembled delegates spent an hour on debate, motions, counter-motions, tablings, votings, etc., on the question of the mechanics of approaching McGovern’s campaign manager; whether as a group or a delegation, on his statement about leaving a residual force in Thailand. While this was going on, the first contingent of an SDS/Yippie/PL/SCLC coalition from the Land, plus many interested unaffiliates, was moving into occupation of the lobby of McGovern’s hotel down the street, to demand a confrontation with him on the pullout question and the SDS antiracism resolution, among others. Six hours, and a thousand degrees of heat later, he complied!

Laird—In the evening we helped build a dike in front of Convention Hall to dramatize the demand to stop the bombing of the N. Vietnamese dike system. Inside, the Mass. delegation unfurled huge “STOP BOMBING THE DIKES” banners in sympathy. At times, during the convention, it was hard to tell the politics or appearance of the delegates from the demonstrators, at least on the surface. Wednesday night was a very quiet political night on the Land; happiness over McGovern’s victory combined with committment to anti-imperialist politics and struggle, despite his nomination. We left early the next morning, tired, out of literature, exhiliarated by the experience and generally happy with our efforts. On the way back we had some ideological struggle over supporting McGovern versus maintaining radical “purity”. That argument was on individual rather than group lines. The majority opinion in the end was that we should work with the McGovern forces, but continue a radical critique and pressure to move his campaign further to the left. That argument will have been repeated millions of times by the time of the election. It will have been, in all cases, a radicalizing experience.

Lorraine—It was hard to explain, back home, why the trip seemed so exhiliarating and important to us. The impact wasn’t that much, nationally. It was a matter, I guess, of the spirit down there on the Land, of solidarity and militant hopefulness, and that had to be experienced to be appreciated.