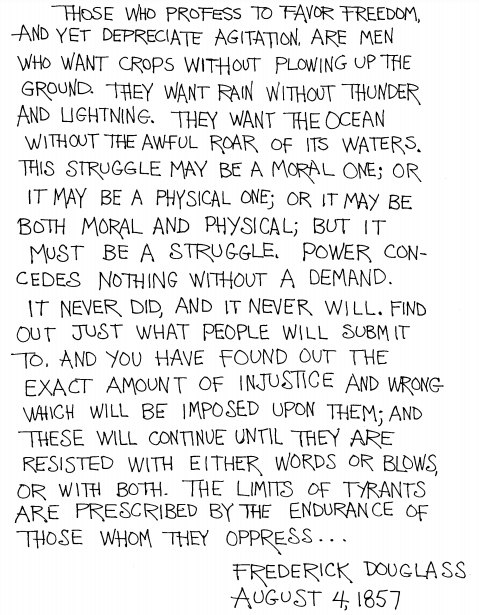 The following is a press release from the Polaroid Revolutionary Workers Movement (PRWM), issued on Oct. 27, 1971:

On October 27, 1970 the Polaroid Revolutionary Workers Movement called for an INTERNATIONAL BOYCOTT of all Polaroid Instant Gadgets. We would like to report that public support in condemning Polaroid in its role as sole supplier of instant pass photos and race ID cards in South Africa has been shown by the loss of $15 million to date in Polaroid sales. Polaroid has admitted losses of $4 million in the first quarter, and $11 million in the third quarter, 1971.

We thank all those right-on thinking people who have supported our campaign this past year as well as call for further international support as we go into Phase II of the International Boycott. We feel that those financial losses should influence Polaroid, either thru the workers or stockholders, and that public response will prove it unprofitable to remain in South Africa.

POLAROID’S EXPERIMENT TO PROTECT ITS INVESTMENT IN SOUTH AFRICA

Polaroid will put the final touches on its PR campaign in January, 1972. That date ends the so-called “Experiment in South Africa”. Polaroid has tried to saturate the public with facts and figures about the economy of South Africa, with the ploy of increased investment in South Africa as the means of ending the insanity, brutality, and inhumanity of the race-identifying system, apartheid. The fact remains that Black South Africa—eleven years ago—chose armed warfare as the means of gaining their freedom. The fact is that Polaroid’s investment in South Africa, and that of all US and foreign investors, is seriously threatened by the Liberation Movements in Angola Mozambique, and Guniea Bisseau, and directly threatened by Blacks in Namibia, Rhodesia, and South Africa itself.

While Polaroid and other supporters of racist South Africa are publicly talking of change in the apartheid system (DIALOGUE), they are planning and preparing the reinforcement of that vicious system. In February of 1972, the South African regime will begin a new registration plan under the Population Registration Act of 1950. The plan is to replace the passbook and race ID’s with a Computerized ID Card. A Polaroid ID Card produced by the ID-3 Instant Identification System hooked with an IBM 360 Computer Data Bank. On March 2,1971 in the South African Hansard it states that the plan was scheduled to begin in June, 1971—cancelled by the PRWM campaign—will begin the first of February, 1972. It will employ 438 persons under the Ministry of Interior, and the Deputy Secretary will be in charge of the system.

This is a new phase for the fascists in South Africa, technological fascism that knows no humanity. Now the police can be replaced by a computer box, and passes by a Polaroid Data Card. We are dealing with the same mentality that reigned in Nazi Germany and that intends to put South Africa into an era that does not allow for conventional destruction. The result of Polaroid’s and IBM’s technological assistance in South Africa—the same used in Vietnam under Operation Phoenix—is aimed at eliminating the forces of liberation in all of Southern Africa.

The future of PRWM is therefore very clear and necessary. We will continue and intensify our efforts against the Polaroid Corporation and all US companies in South Africa. The International Boycott, already a success, will continue with reinforced efforts nationally and internationally. We will continue to work to bring about a consciousness in the US concerning the role of the government, corporations, and an unknowing public that aid and abet that inhuman system of forced labor.

We must and will continue our public opposition to forced identity cards being issued throughout this country under various innocent disguises. We are opposed especially to the recent plan forcing high school students in Boston, Cambridge, Richmond, Berkeley, Memphis, New Orleans, Chicago, Detroit, Washington, D.C., and too many more cities to carry an identity card and to be entered into a national computer data bank. We see an increasing similarity to the US and South Africa in the laws and conditions, not only for blacks but especially the poor. We call upon the public to answer to the seriousness of compulsory identity card and the uniform means that is being imposed—Now,before it is too late.