May 15 — Science for Vietnam Conference

Armed Forces weekend (May 15) was commemorated by Science for the People by holding conferences in Chicago, Boston, and Madison on Science for Vietnam.

These conferences were held to build the Science for Vietnam Project initiated by the Chicago Peoples Science Collective shortly after Dick Levins returned from a visit to Hanoi. Of course the success of these conferences depends on what happens now that they are over. Hopefully an increasing number of people will become involved in projects for providing scientific and material aid to the Vietnamese people. By so doing, scientists and engineers can not only express their opposition to the War in Southeast Asia and their committment to the use of science for the people rather than against the people, but they can also work on constructive programs as scientists and engineers in support of their political understanding and beliefs.

The conferences in Boston and Chicago each drew nearly a hundred people (in Boston’s case even in spite of the quite rare, sunny weather) and provided an opportunity for scientists from in town and out of town to meet together for discussions and workshops. Since the two programs were similar, a look at the Boston conference will provide a good idea of what happened in both. In the morning the use of science in the third world was discussed by Bill Haseltine and Carl Goetch. Bill described the miraculous advances which have been made in anti-personnel weaponry, chemical warfare, and automated battlefield technology. Carl discussed how the effects of the introduction of modem agriculture technology depend upon the existant social and economic institutions of a country, sometimes worsening aocial conditions while the suitable technologies often fail to be developed.

Mark Ptashne and Noam Chomsky both of whom have visited Indochina, then described the situation in Vietnam, specifically with regard to the level of science, technology and education there. Mark’s slides of Hanoi showed a very healthy, cheerful population. The degree to which the North Vietnamese have eradicated illiteracy, malnutrition, and respiratory diseases under the severe conditions of warfare and bombardment, seemed nothing less than astounding. Their achievements are the product not only of their great intellectual strength and ingenuity but also of their determined insistance upon self reliance. We understand that it is only within this framework that the Vietnamese request and accept help in a fraternal spirit of cooperation. While the Vietnamese benefit from our scientific aid, we surely can benefit from their understanding of how to use science to meet the needs of the people.

During the afternoon, workshops were held on various topics including medical problems and aid, projects relevant to herbicides and bomb damage, aid for scientific development in the 3rd world, fighting local war production and research, and analyzing the general strategy of people’s science. Out of these workshops came several groups which will work in conjunction with the Chicago group and others to build projects of scientific assistance with our Vietnamese colleagues. Work has already been done in the areas of herbicides, reforestation, pest control, and medical problems.

Those interested in becoming part of the Science for Vietnam project should contact: Richard Levins, Department of Biology, University of Chicago, Chicago, Illinois 60637 or The Science for the People Regional Center, 9 Walden St., Jamaica Plain, Mass. 02130 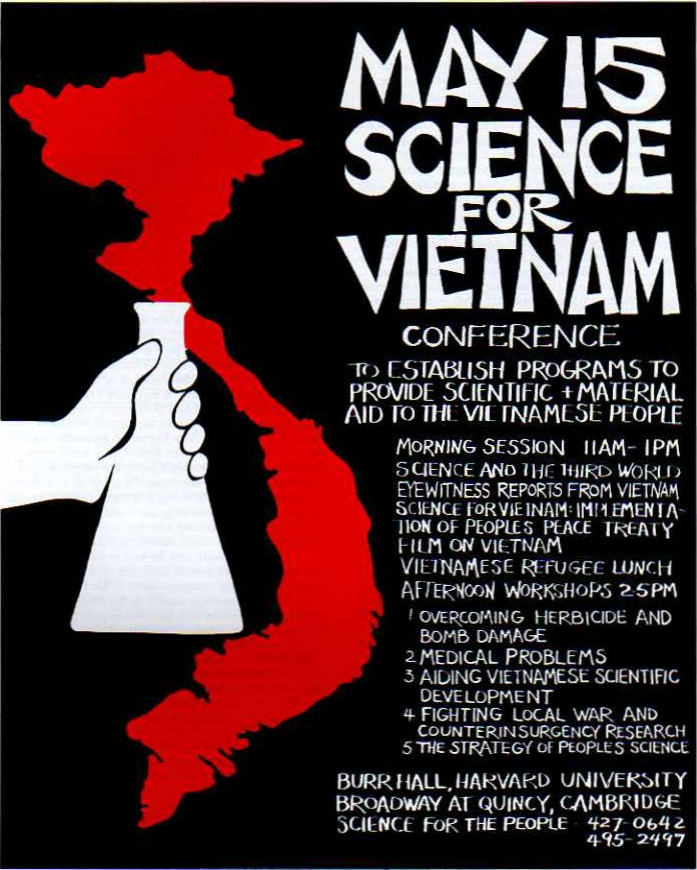 A Scientific Visit to Hanoi
Readings