SESPA Tells It Like It Is: Opening Statement AAA$ ‘70

The first major event at the AAA$ was the Special Lecture to be delivered by Dr. Philip Handler, President of the National Academy of Sciences, on the “Obligations of the Scientific Community.” The forty-some page text released in advance made it amply clear that we were going to be treated to one of those consensus-at-all-price speeches. This then provided immediate contrast to the Science for the People speech which exposed the true role of science in our society and the real conflicts which cannot be glossed over.

Shortly before the scheduled time, members of Science for the People asked Mina Rees, the chairperson, for permission to address the audience for fifteen minutes when most of the people were assembled. Permission was granted. When a minor fraction of the hall was filled, however, Mina Rees determined that it was time for us to start. Since that was not the agreement, several of us occupied the podium until the hall was nearly filled.

Unlike Handler’s speech ours (prepared by Chicago SESPA) was short and to the point. Here are some major excerpts:

In 15 minutes Philip Handler is going to talk to you for an hour and a half about how procedures and practices in the Pentagon can be made more rational, and how the scientific community can help prop up the ruling class’ corporate profit by distributing scarcity more effectively. We’re here in the interest of the people upon whom the power of the ruling class is exercised, the people who are not interested in rationalizing their rule, but destroying it. The people of this country and the world did not select Handler to be head of the National Academy of Science or Seaborg to be president-elect of the AAA$, in fact, neither did the great majority of you, but you can be damned sure that the decisions of these men will affect all of us.

How did men like these get into positions from which they can control scientific resources and training, and speak to you tonight from the sanctified podium that we have temporarily usurped? Whose interests do they serve? Who will have the resources to apply the new knowledge created and to what ends will these applications be directed?

. . . .As you go scrambling after grants and support from institutions like NSF, NIH, DoD, ONR, FART, etc., etc., it is, of course, more pleasant to imagine a government trying to help the poor and sick, and corporations funding billion-dollar foundations in order to improve the quality of people’s lives. . . . But we don’t have two governments, one which benificently [sic] funds research and another which malevolently kills in the ghetto, in Latin America and in Southeast Asia. Nor do we have two corporate structures, manipulating for profit on the one hand, while desiring social equity and justice on the other. Rather there is a single government-corporate axis which supports research with the intention of acquiring powerful tools, of both the hard and software varieties, for the pursuit of exploitative and imperial goals.

One month ago the Black Panther Party tried to call the black and white revolutionary movement together in a convention in Washington, D.C. After arriving in the capital, the people discovered they had been deprived of all possible meeting places. Many never arrived in the first place because their chartered buses were cancelled less than 24 hours before departure. Why was that convention prevented from taking place, while this one is provided with all the cushy fluff and privilege that this city is capable of putting up? Right now in Chicago, Daley and his pigs are pushing legislation to block the free people’s health clinics established by revolutionary groups like the Black Panther Party and the Young Lords Organization. Such science for the people they have to destroy, while this science for the ruling class is given three of the city’s poshest brothels, and the protection of the same guns that murdered Fred Hampton and Mark Clark of the Panthers in their beds on Dec.4, 1969. You receive the benefits and are allowed to rub shoulders with the power merchants because you are their servants.

. . . . Who pays for our scientific work? The people pay for it, primarily the poorer people, through the taxes they must pay, and through the profits that are ripped off from them by the corporations. The corporations don’t pay much in the way of taxes. Instead they support the foundations which front for their interests. And

then, of course, we get our money from the government and foundations. Now who benefits from our scientific work? Obviously, the same goverment[sic]-corporate axis that cheats the people-and we are the people-into paying for the system that oppresses us.

…. But what is to be done? Huey Newton said, “The spirit of the people is greater than the man’s technology.” Too many of us have been involuntarily recruited into creating the man’s technology. Our job now must be to shift our services away from the man and align ourselves with the spirit of the people. Traditional attempts to reform scientific activity, to disentangle it from its more destructive and vicious applications have failed. Actions designed to preserve the moral integrity of individuals without addressing themselves to the political and economic system which is at the root of the problem have been ineffective. The ruling class can always replace a Leo Szilard with an Edward Teller. What is needed now is not liberal reform or withdrawal, but a radical attack, a strategy of opposition. Scientific workers must develop ways to put their skills at the service of the people and against the oppressors.

This is what we are about, and this is why we are in attendance at this convention. There are perhaps many people here whom we would consider our brothers and sisters and with whom we wish to communicate and develop that strategy of opposition for scientific workers.

Finally, one brief word about free speech and the necessity for our insisting on this opportunity to address you. Men at the top of the scientific establishment can command at will the enormous audience the mass media provide access to, because their interests are congruent with those of the people who control the media. Similarly, scientists working within the accepted bounds of the AAA$ establishment have easy access to the audience this organization can provide. We who are challenging the role science is playing in the United States today-that of serving ruling class interests-have to struggle for our supposed right of free speech. Speech, like the products of science, is freer for some than for others in a capitalist society. Of course the granting of equal time to opposition viewpoints does not create a climate of freedom when the two sides are not equally capable of putting what they have to say into effect. Nevertheless, during the remainder of this convention, we will be insisting on some of your time and we intend to get it.

You still have the opportunity to work constructively with the movement for revolutionary change. There is still time to stop working for the man and start serving the people. But if scientists continue to provide the ruling class with more tools of oppression, people like us won’t be standing here trying to communicate our ideas to you. Out of desperation and urgency, and because no other solution is available, we will be out in the streets, with all of those excluded from ruling-class privilege, doing everything we can to tear this racist, imperialist system to shreds.

Then Handler spoke. His talk was studded with quotes from establishment-party platforms, woeful cries about U.S. science losing world leadership and digs at women, students and dissenters. It merely ushered in the the endless number of trite and boring presentations, to the extent that many looked forward to our activities at least to relieve the boredom. 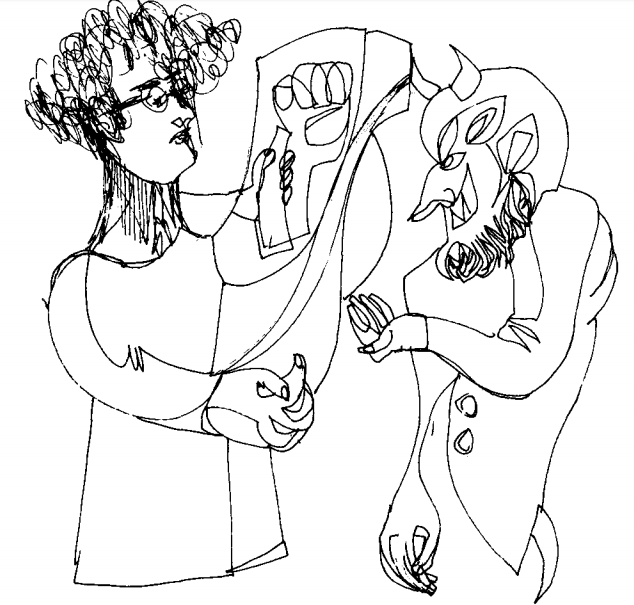