In the Land Where Coca Cola is Queen

“Food additives are like friends. We need and depend on them but often take them for granted.” 1

We have taken the above quote on food additives from a recently published book called Panic in the Pantry, co-authored by Frederick J. Stare and Elizabeth M. Whelan. Criticisms voiced by nutrition activists have been so widespread and clamorous in recent years, they made necessary the apologetic response in this book. Stare condones the addition to foods of cyclamates, DES2, and sugar while warning against overconsumption of peanuts, yogurt, and wheat germ. Of course there are natural toxins in many foods and our bodies are probably capable of detoxifying large numbers of trace poisons naturally found in foods, but to increase deliberately the amount of poisons in one’s diet with artificial and potentially dangerous additives seems ludicrous to us. Stare also claims that natural fertilizers are no different from artificial fertilizers and that food grown on chemically supplemented soil does not differ in its nutritional qualities from organically grown food. He forgets about trace minerals (eg: zinc, manganese) which have been recognized only recently as essential in our diets. Plants grown on soil lacking trace minerals will not provide us with what we need to thrive.

Stare defends on behalf of the manufacturers the Terrible Ten, the list of foods which Michael Jacobsen of the CSPI (Center for Science in the Public Interest) listed as representative of the food industry’s worst efforts (See Table). Stare claims “these foods, like all foods available today, when used in moderation and in the context of a well-balanced diet, contribute (his italics) to both our physical and psychological well-being.”3It should be good news to Dr. Stare that sometime during this year, soft drinks will replace coffee as America’s favorite drink.4

Frederick Stare is chairman of the Department of Nutrition at Harvard University. He has received increasing financial assistance for his research from the Nutrition Foundation which Stare himself had a major role in organizing (he is editor of their publication Nutrition reviews). The Nutrition Foundation, founded in 1941, is supported by the largest food processors and refiners in America. “The listing of its Board of Trustees reads like ‘who’s who in food.’” 5 Many of the research projects at universities and elsewhere, such as those Stare quotes as evidence for his attack in his book, are funded by the Nutrition Foundation as well as by the Sugar Research Foundation, the National Dairy Council, and by food companies themselves such as General Foods. Stare himself receives for research more than $200,000 yearly from the food industry.6It is little wonder that Stare thinks sugar is a wonderful food! It is also no surprise that when the Consumer’s Subcommittee of the Senate Commerce Committee heard testimony in 1970 on the state of the American diet Stare testified how good and nutritious breakfast cereals were. Elizabeth Whelan (his co-author) had done her graduate work under Stare at Harvard and is now a writer and researcher in public health. 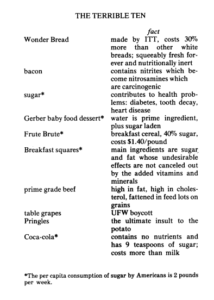 “No American in his right mind would advocate putting a cancer-causing agent in the food supply.” 7

In this way, Stare lightly dismisses as unnecessary the Delaney clause (part of the 1958 Food Additives Amendment to the Federal Food, Drug, and Cosmetics Act of 1938. The Delaney clause states that any additive which is found to induce cancer when ingested by man or animal must be removed from the market.). He points out that small amounts of carcinogens exist naturally in a great number of foods from apricots to sassafras. His description of Food and Drug Administration (FDA) action banning the dye Violet I from foods is so colorful that we will summarize it for you.

Stare says he is confused that the FDA banned Violet I because of one single research project after it had been used without question for 22 years to mark the grades of meats. He claims to be puzzled that remaining Violet I products were allowed to stay on shelves, and that the FDA is now retesting the coloring and may allow it to be rought back. In the meantime, Reds # 2, 3, and 40 and Blues #1 and 2 are mixed to get the violet color to stamp meat.8 Stare sees all this as ridiculous. We are not confused and want to explain to him why such situations recur time and again.

A few publicized cases such as the banning of cyclamates in 1969 (which, it has just been announced, will be coming back into our foods) have given the general public a feeling of security that the FDA is looking out for their interests. Such confidence in this government regulatory agency proves unwarrented. For one thing, it is the manufacturers and not the FDA which test new food additives and it is the same manufacturers which generally decide what constitutes adequate scientific evidence. After a manufacturer submits to the FDA a petition for approving the introduction of a new additive, the testing evidence in the petition becomes confidential and is not available to the public. It is not simply a question of the FDA doing its own test (as it did when it retested Violet I after 22 years of use) or of insisting that the manufacturers do more stringent testing. The important question to ask about the FDA is to whom does it owe its loyalties. The answer is that the FDA is loyal, not to the consuming public, but to the food manufacturers themselves. The FDA considers additives or any chemical safe until proven guilty. That is fine in a legal defense of a person but such risks should not be taken with our well-being.

We cannot resist mentioning, in passing, some of the food industry’s ties with governmental agencies. Virgil Wodicka, director of the FDA Bureau of Foods until 1974, previously worked for the Quartermaster Corps, Ralston Purina, Libby, McNeil, and Libby, and HuntWesson.9He is now a private consultant for industry. Peter Hutt, General Counsel for the FDA, who with Frederick Stare condemns the Delaney clause, previous to his FDA appointment vigorously represented corporate interests in food-and-drug-law cases. Hutt represented, among others, Continental Baking [ITT], the Cosmetic Toiletry and Fragrance Association, the Institute of Shortening and Edible Oils, Carnation Company, and the National Association of Chewing Gum Manufacturers.10

FDA employees, after leaving their governmental positions, often can expect an industry position (the deferred bribe). And so to return to Stare, “We have indeed been fortunate, in the past and currently, in having FDA commissioners who are intelligent, professionally trained, reasonable, dedicated, and apolitical individuals – the very type we should have in top regulatory roles.”11

The AAAS and Food

As chairman of the Department of Nutrition of Harvard University, Frederick Stare has often been a prime establishment spokesman on matters of food. Establishment academics have been used traditionally as apologists for American food corporations and as theoreticians for governmental food policy. The AAAS, long a reflection of the major interests in academic research, considers food a major concern. They devoted an entire issue of Science to food (May 9, 1975) and for the upcoming annual conference in Boston, a significant number of sessions will address food issues. Stare was chosen by the AAAS to moderate, in part, a three-day AAAS conference “The Food Dilemma: It’s no Picnic” this past November at the Museum of Science and the Public Library in Boston as a preliminary discussion forum to the February conference.

The articles in the May 9, 1975 issue of Science (devoted entirely to food) range over a variety of topics from agricultural research to governmental policy and international nutrition. The articles show some realization of the interaction of politics and economics in the present world patterns of food distribution (two articles deal with food production in India and China). There is little or no interest, however, in changing existing social structures toward an equitable distribution. Rather, solutions dependent on the heavy use of sophisticated technology are proposed (e.g. computer programming to anticipate future needs for famine relief). Further, most articles take for granted that the cessation of population growth must occur. The authors may believe that they are tackling the roots of world hunger, but they are only studying the symptoms. The authors who contributed these articles to the AAAS are either university academics (such as Jean Mayer of Harvard) with positions in prestigious agronomy or nutrition departments or members of superinstitutes and planning centers.

Everyone that the AAAS presents at its conference will not be as reactionary as Frederick Stare. It seems when reviewing the agenda that the AAAS has scheduled a broad spectrum of political views, but one must be wary of the powerful influences behind certain speakers. As a counterbalance to the usual AAAS sessions there will be a full-day session arranged by George Salzman of Science for the People: “Energy and Food Production: Contemporary Technology and Alternatives.” We hope that alternative views are expressed at all sessions about food and that food not be dealt with solely as a neutral issue. Food has become a growing political tool and we must see that it is used for the people. Many nutrition activists groups12  exist in Boston as well as in other cities and it is our hope not only that their influence be felt by all the Stares in all the pantries, but that they serve as a core for organizing people around that very political issue: food.