The author of this article worked and trained with about three dozen industrial hygienists employed as inspectors by federal OSHA or by various state OSHA agencies. This report is preliminary and necessarily limited in scope. It reflects observations and the fruit of casual conversation. over the course of a few months. (For a brief description of OSHA see the box on page 4.)

Social programs find direct expression in the people who carry them out. Who are OSHA inspectors? Where do they come from? What can we expect them to do?

Most OSHA inspectors, particularly industrial hygienists, are white males. Women inspectors are notably rare, apparently constituting less than 10% of the total inspection force. Inspectors from northern industrial states tend to come from ethnic European backgrounds. Inspectors from the South and West tend to be WASP’s. A few inspectors are Black, Latin, or Asian. They seem to enter OSHA jobs primarily from other branches of the federal government, particularly the military. Most inspectors seem to come from skilled blue collar or middle-rank professional families. A few come from relatively unskilled, working class backgrounds and a few from elite professional families. A good many consciously aspire to higher class status. They hope to use their OSHA income (supplemented in many cases by the incomes of their professional wives) to capitalize small businesses or to speculate in real estate.

Regardless of class background, all OSHA hygiene inspectors have college degrees in science, or some closely equivalent training. Many have bachelor’s or master’s degrees in chemistry and quite a few have degrees in biology or engineering Ph.D.’s, particularly in chemistry, aren’t rare. Surprisingly few people come to OSHA programs with direct training in industrial hygiene, and those that do generally enter from pre-OSHA state occupational health programs or from other government agencies (the armed forces, for example, maintain their own industrial hygiene programs). It appears that very few entry-level OSHA hygiene inspectors come from occupational health backgrounds in capitalist enterprise, perhaps because government pay scales are not competitive.

OSHA inspectors tend to be young, in their twenties or thirties. Some are hired directly out of school, but many have considerable experience in other jobs, most typically, perhaps, in quality control or research and development in medium sized enterprises. They take OSHA jobs because company chemistry is dull, repetitive, and often insecure, and because government employment offers the promise of security, job mobility, and less day-to-day supervision. They do not, and this is an important point, take OSHA jobs out of a deep intrinsic interest in occupational health or workers’ welfare.

How Inspectors View Their Jobs 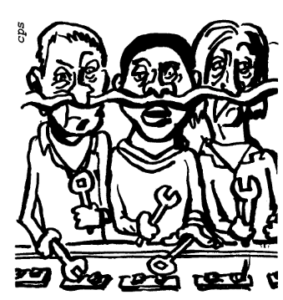 How do they feel about their work? For the most part they see themselves as technocrats in the mini-profession of industrial hygiene. The government furnishes them set tasks and they prefer to accomplish their work competently but with a minimum of exertion and hassle. They do not welcome anything that complicates smooth, orderly, straightforward inspections. Large plants are to be avoided. They require way too much work for one report and their managers tend to fight back disproportionately hard, drawing on sophisticated technical support. Very small workplaces are also a nuisance. There are too few people exposed to anything dangerous to make your time worthwhile. Militant unions are a pain in the neck. They insist on pointing out every little item and it takes forever to get through the plant. Apathetic union representatives are also discouraging, though they make life easier. Why even go to plants if the owners don’t like you and the workers don’t care. Whatever happens, try to avoid taking too many air samples. The work is tedious and the resulting paperwork horrendous. So go the views and preferences of a good many OSHA inspectors.

Surprisingly, a large proportion of inspectors dislike their role as enforcement officers. They’d rather, they say, be professionals than cops. If only they could jettison the rigamarole of citations and penalties they could get on with their real work as hygienists. They do understand, however, that without enforcement powers, the capitalists and managers would laugh them out of the factories. A good many inspectors hope to escape enforcement by getting their training in OSHA and then absconding to better-paying (but OSHA-inspired) jobs with private concerns.

The OSHA program sits in the midst of a great class struggle and OSHA inspectors, try as they might, can’t escape its repercussions. Though the OSHA program itself is a capitalist reform program administered in the interests of the ruling class, OSHA inspectors aren’t capitalists. They are caught in the middle, between capital and labor, a position they find extremely uncomfortable. Ideologically they lean toward the capitalists, but in their own work they collect and trade horror stories about the day-to-day atrocities the same capitalists commit, and they see the companies fight their professional efforts tooth and nail. Still, they rarely verbalize any profound interest in worker well being, they don’t identify with the workers they come in contact with, and they certainly don’t see industrialists as general enemies outside OSHA’s limited arena. Nothing in their background, nothing in their political outlook, and nothing in their OSHA training leads them to do so.

How SESPA/SftP Should Relate to Inspectors

How can we relate to OSHA health inspectors? Right now we probably cannot organize inspectors as a group around a radical political program. Their social circumstances militate against this, and although they are not particularly well paid by professional standards, they do have steady jobs in a depression and they perceive their employment opportunities to be expanding as OSHA grows. This does not preclude links with individual inspectors. It’s likely that many inspectors would attend properly advertised courses, seminars, or conferences offering education in concrete areas of industrial hygiene and taught from a radical perspective. As noted above, most OSHA hygienists learn the basics of their trade fairly haphazardly on the job. They feel a real need for more education and radicals should be able, in at least some cases, to step in and fill this gap by organizing appropriate programs. 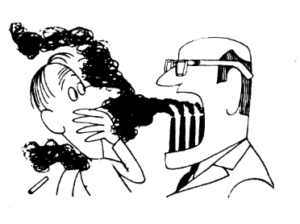 OSHA inspectors have a good deal of valuable experience. They see more work places in a month than most of us stand to see in a lifetime. They can strike limited but valuable blows for better working conditions, particularly with the help and collaboration of militant unions or union caucuses. Not least, they have a vested interest in seeing that the OSHA program does not collapse in the face of reactionary attacks. With proper effort on our part, many OSHA inspectors can and should be won to closer contact with the radical community and to a more sophisticated and sympathetic understanding of workers’ struggles.