Review: The Energy Crisis and the REAL Crisis Behind It

The “Energy Crisis” and the REAL Crisis Behind It Dave Pugh and Mitch Zimmerman, graphics by Gar Smith. Published by United Front Press, June 1974.

Did someone say the “energy crisis” is over? The panic may have passed with the fall in gasoline prices from last year’s high, but in the near future new price increases are likely to be announced. This will not be a particularly surprising turn of events to those who have a good grasp of what’s happening in the energy business. But for those who don’t, United Front Press’ booklet, The “Energy Crisis” and the REAL Crisis Behind It, makes compelling reading. This lively, well illustrated, factual booklet provides a basic understanding of the economic and political forces at work in the energy arena. It brings together, in easily digestable form, the various facets of the energy question.

Beginning with convincing evidence that the “energy crisis” was in reality a profit crisis for the oil monopoly — the oil shortages were contrived by simply witholding oil from the market — the booklet traces the historical developments leading to the oil monopoly’s falling rate of profits (20% in the 1950’s, 14% in 1960, 8.7% in 1972, and then up to 15.1% after the declared crisis on 1973). A major factor has been the struggle for Mideast oil. The booklet describes the role of international capitalist competition in undermining the position of the big 7 (Exxon, Mobil, Texaco, Gulf, Standard of California, Shell, British Petroleum), especially in the face of the ever more independent and militant stance on the part of some of the oil-producing countries. The Palestinian Liberation struggle has been a main driving force behind this stance, giving rise to the October 1973 war which catalyzed the skyrocketing of crude oil prices in the Mideast at that time.

Following this historical sketch, the booklet delves more deeply into the economic consequences of declining rates of profit, domestically and internationally, and stresses the pivotal role the Middle East will play in coming years (Mideast oil accounted for 60% of the big oil companies’ profits in 1973 even though it amounted to only 13% of oil used in the U.S.). What emerges from this analysis is that the options of the oil monopoly are limited, that its strategy for the future will almost necessarily involve suppressing popular liberation movements in the Mideast through military and/or CIA intervention while at the same time putting the squeeze on working class and poor people in the U.S. through vicious price hikes. Sound familiar? The profit crisis in oil is obviously but one part of a developing economic crisis for the capitalist system as a whole.1

The concluding section of the booklet deals with strategies of opposition to the oil monopoly. After analyzing the deficiencies of nationalization, anti-monopoly legislation, and taxation reform strategies, the authors describe some of the more progressive struggles which have been waged by working class and poor people: opposition to utility rate increases, as exemplified by the Georgia Power Project and many similar struggles (see “Power Belongs to the People,” SftP, vol. VI, no. 4, July 1974); the strike last winter in West Virginia of 27,000 miners, who forced the governor to release sufficient gasoline supplies for miners to get to and from work; tenant actions against landlords not providing adequate heat; the independent truckers strike of February 1974; opposition to the importation of cheap coal from racist South Africa; and actions in support of Mideast liberation forces. All these struggles, in conjunction with those in western Europe (for example the British miners’ strike) and in the Third World (for example the fight against the building of a huge superport/refinery in Puerto Rico), constitute a broad based attack not only on capitalist control of energy, but on the capitalist system as a whole.

The comprehensiveness and general anti-capitalist and anti-imperialist orientation of this booklet makes it much more widely useful than other books now available on the “energy crisis”. For example, a study sponsored by the Marine Engineers Beneficial Association (AFL/ CIO), called The Energy Monopoly: Failure of Anti-Trust Policy, probes in depth the monopoly structure of the oil industry and its control of other energy resources (we should call it the energy monopoly). However, after hammering home the failure of anti-trust policy since time immemorial, the book concludes that what is necessary now is — you guessed it — more anti-trust policy. Similarly with (head of the Communist Party U.S.A.) Gus Hall’s book, The Energy Rip-Off, which also fails to transcend electoral politics.

The principle weakness of the United Front Press booklet is that it does not deal adequately with the political significance of high energy consumption per se. While it does show that increased energy prices — to maintain high profit rates — are an attack on the working class, it does not make clear that the use of energy in a capitalist economy is, in itself, a weapon of class struggle.

For example, the use of energy in the process of production means the substitution of fossil fuels (or nuclear fuels or whatever) for human labor power. This means the use of machinery to achieve increased productivity, which under capitalism amounts to increased exploitation2 of workers and, further, to growth in the concentration of capital (and economic control) in the hands of the capitalists. Historically, this drive for increased productivity and for the expansion of capital on the part of the capitalist class has meant the periodic crises of overproduction (like the depressions of the 1930’s and 1970’s) characteristic of the capitalist mode of production. What this means in human terms is unemployment and deprivation for the working class, assaults on unionized labor, poverty, the denial of democratic rights, and war. 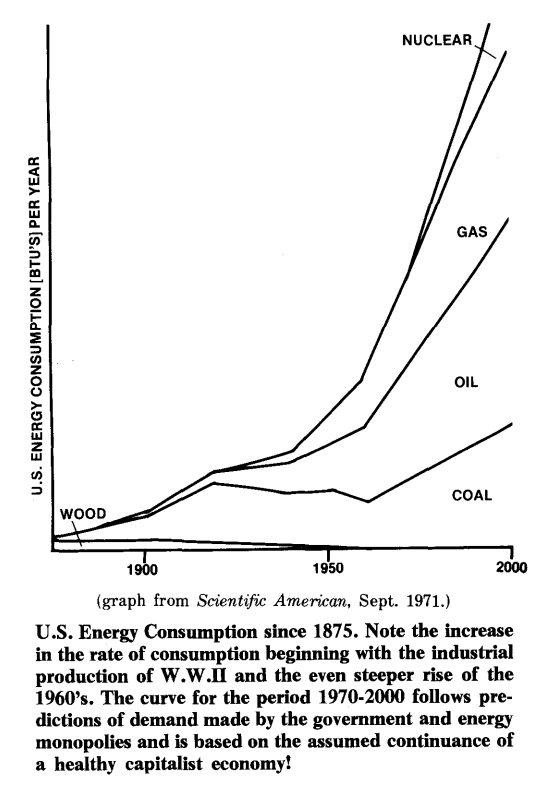 Yet the massive consumption of energy in the U.S. is hailed in the newspapers and in oil and utility company advertisements as an index of our high standard of living! Since World War II total energy consumption in the U.S. has continued to skyrocket (see graph) despite a downturn in the growth of population, and despite the fact that since 1965 at least, real wages have been on the decline. How then, can the high energy demand be attributed to excessive individual consumption?

The answer: only by ignoring the system of production itself, by ignoring, for example, the fact that a huge part of the increase in energy consumption in the U.S. is absorbed in the production of purposely short-lived goods (planned obsolescence), not to mention such colossal waste as the Indochina War or the space program. We have a situation in which, say, two cars are produced to last as long as one good one could — thus to meet the same need, twice as much energy and material resources are consumed. This decrease in the quality of goods erodes whatever gains have been made through labor struggles by decreasing the buying power of the working class as a whole. So increased energy consumption in the capitalist system is not only tied to the exploitation of workers directly but also to the production of waste and junk this same working class is forced to buy in order to survive.

Take food for example. People do not consume more or better food than, say, thirty years ago. In fact, most processed food is nutritionally deficient (this is well documented especially in the case of breakfast cereals, hot dogs, and baby foods). Food prices are on the rise. At the same time, the amount of energy consumed in the growing, processing, transportation, and marketing of food has been increasing rapidly. Since 1940, for example, the energy required to produce each calorie (the calorie is a unit of food energy) of food consumed in the U.S. has more than doubled. This consumption of energy has been in production of farm machinery, gasoline, fertilizers, food packaging and processing, etc. All that frozen, artificially flavored and preserved, precooked, plastic wrapped shit is no cheaper or more nutritious, even for all the energy consumed in producing it! Quite the contrary. But Tenneco, ITT, Del Monte, etc., etc., have a stronger monopoly, a better controlled, vertically and horizontally integrated machine for amassing profit. Thus, the increased energy consumption associated with food is not an index of increased nutritional consumption on the part of the people; it is an index of changes in the means of production by which more profit is extracted from the workforce. [See “Concentration of Power in the Food Business,” SftP, Vol. VII, no. 2, March 1975.]

What is true for food, is true more generally. To meet basic needs, people are forced to consume ever increasing amounts of energy, not by choice, but because of the way labor is organized to produce goods under capitalism. Of course under a different system of production — under socialism — working people would decide how to allocate resources to meet their own needs. It would be a means for directly serving the needs of people as they are expressed in a democratic society.

The capitalists, in order to hide the real basis of excessive energy consumption, use subterfuges like encouraging people to cut back on individual energy consumption: turn down your heat, drive less, cook less, eat less… 3 Not able to reduce the energy consumed in production without jeopardizing their profits or control, the capitalists are demanding sacrifices from working people. There must be no cutback in the already depressed standard of living for millions of Americans.

To conserve energy, to rationally and humanly use our natural resources, requires that the present outmoded, oppressive, and wasteful system of production be replaced. We must do away with the insanity of capitalism. The task before us is to create the socialist alternative.

Science and Technology in Brazil
Corporate Connections of Notable Scientists