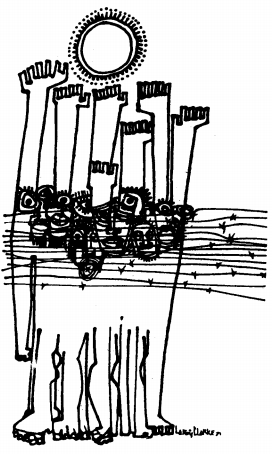 Several questions are raised by the Chile article. First, to what extent can special groups like doctors be expected to divorce themselves from their associations with the dominant class and work for significant change? The article suggests that when it comes to a choice between class interests and change, most Chilean doctors chose class interests. Second, does the example of Chile constitute proof that change within a system is impossible in other countries as well? And third, what does one do toward a new system while living in an old one?

This last question led to disagreement between members of the collective. The original Chile article ended with a list suggesting what Americans might do to aid the people of Chile. We, the editorial collective, decided to eliminate those suggestions although this seems to contradict SESPA policy to provide, whenever possible, suggestions for concrete actions. This decision was made after a discussion which disclosed disagreements between us. To some of us it seems that these suggestions, calling as they do for individual actions, propagate an illusion. The Chile article itself argues and some of us think that such actions, because they are not an organized attempt to change the system, are at best fruitless and at worst counterproductive. We do not wish to translate political problems into moral terms but rather to find an effective way of translating our moral concern into political action.

This is the limit of our agreement. How to make that revolution — whether it begins with individuals or organizations; how individual action becomes collective action; when moral action (like writing letters or not buying Chilean goods) becomes political action — is still a matter of disagreement.

Some of us would answer these questions by saying that the ideology and practice of professionalism serve only the interests of capital; that on a very fundamental level professionalism stands in the way of a communist working class conception of the social nature of production and consequently of the collective concept of responsibility.

COVER: Sketch of an Inca Lloth

EDITORIAL PRACTICE: Each issue of Science for the People is prepared by a collective assembled from volunteers by the magazine coordinating committee. A collective carries out all editorial, production, and distribution functions for one issue. The following is a distillation of the actual practice of past collectives.

Opportunities for participation: Volunteers for editorial collectives should be aware that each issue requires a substantial contribution of time and energy for a twelve-week period. Help is always appreciated and provides an opportunity for the helper to learn and for the collective to get to know a prospective member. There are presently plans to move the magazine production to other cities. This will increase the opportunity for participation. For legal purposes, Science for the People has become incorporated. Science for the People is now available in microfilm from Xerox University Microfilms, 300 North Zeeb Rd.,. Ann Arbor, Mich. 48106, (313) 761-4700.

Evolution or Revolution: Lessons from Chile