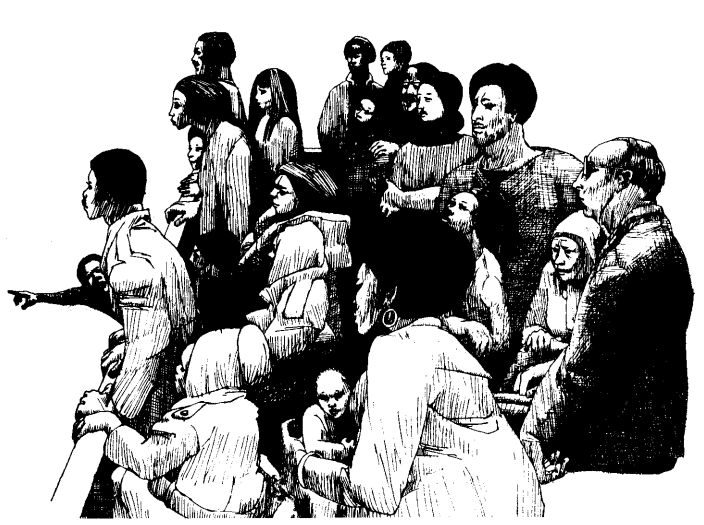 When we first came together to discuss the focus of this issue, our feeling was that, of late, the magazine had been pretty theoretical. We wanted our issue to be more of a political tool, to focus on the strategy and tactics of people’s daily struggles. We particularly wanted practical articles, articles on political organizing; articles that people can incorporate into their practice. This is not to say that theoretical articles should not be included, but rather that there should be a balance in hopes that the theoretical articles will help to produce a better practice.

We solicited this type of material, with a special emphasis on health related articles, by sending a letter to all of the chapters, and by talking with people in the Boston area. The response was encouraging, although in most cases we only recieved one article on a given subject. We were disappointed that we didn’t recieve more articles on women’s issues, and we strongly urge people to submit more material on women.

During the course of our editorial meetings, we had several knock-down, drag-out, political fights, but in the end our collective politics were forged without bitterness. We learned a lot of editorial skills, sharpened our politics, and all in all had a damn good time.

We see the production of an issue of Science for the people as a creative political act in which the collective solicits, organizes, and edits material to produce a work of political art and propaganda. The activity of the organization in general and the production of the magazine in particular is a part of a much broader struggle for liberation. As part of that struggle we feel that the organization can ask nothing less of an editorial collective than to put forward the best possible political analysis and practice. While the magazine has an obligation to present differing opinions and encourage open and comradely discussion and criticism, we see it not merely as an assemblage of opinions but also as an active tool in a political struggle.

Political writing, as we have discovered, is a difficult task. It is unusual for an individual author to produce an article so clearly written, well organized, and above all so thorough in analysis, that it cannot be improved. This being the case, we believe it is very important for the editorial collective to take an active role in the creation of materials for the magazine. With respect to articles submitted we see our role primarily as a process of entering into a dialogue with the author, where the collective makes suggestions and criticisms to the author, including rewriting, clarification, or even a different political perspective. Suggestions and criticisms, however, must be concrete and specific to be constructive, explaining precisely what the problem is and how it might be changed. After considering the recommendations of the collective the author could then incorporate them in the article or make alternative suggestions or criticisms of the collective’s
recommendations.

Ideally this back and forth process should go on until a high level of unity has been reached between the author and the collective or the remaining disagreements have become clearly defined. If at the end of this process there is a sharp political disagreement, then the collective
has, in our opinion, an obligation to the movement and to the organization to do one of two things: [1] either to write an editorial stating clearly its differences with the article while giving the author(s) the opportunity to respond or withdraw the article, or [2] in extreme cases to reject the article as being counter to the general political direction of Science for the People.

EDITORIAL PRACTICE: Each issue of Science for the People is prepared by a collective, assembled from volunteers by a committee made up of the collectives of the past calendar year. A collective carries out all editorial, production, and distribution functions for one issue, The following is a distillation of the actual practice of the past collectives.

Editorial Procedure: The content of each issue is determined by unanimous consent of the collective. Where extensive rewriting of an article is required, the preference of the collective is to discuss the changes with the author. If this is not practical, reasons for rejection are sent to the author. An attempt is made to convey suggestions for improvement. If an article ts late or excluded for lack of space, or if it has non-unanimous support, it is generally passed on to the next collective.

Philippines: The Next Vietnam?