With this issue Science for the People (SftP) begins its fourth year of publication. It is fitting at this time to review our progress over the past several years, to report on re-organizational efforts under way, and to look to possibilities for the future.

While the last couple years have witnessed an apparent decline in political activism and a near stand-still within various segments of the movement, SESPA/SftP has remained quite healthy. Our organization has grown in numbers; but much more importantly, there has been a positive shift in its political orientation, a shift from a predominantly anti-war orientation to a more long-term anti-capitalist and anti-imperialist one. The magazine has been an important element in this shift. Its articles have brought out the systemic nature of the misuse of science and technology and have sought to challenge the dominant ideology of science and of our society.

Since its inception in August in 1970, SftP has appeared regularly and dependably every two months. The time and energy required for this effort has come from the members of the editorial collectives that have been responsible for the different issues of the magazine. In the process of putting out a magazine, the editorial collectives have not only learned the technical skills involved, but have increased their own political understanding and their ability to work collectively.

During the past few years, SftP has been the main voice of dissidence within the scientific and technical work force. For those who have felt isolated and estranged from the established practice of science and technology, it has provided a voice for their alienation and an organ for their political development. The magazine has in turn benefitted from their support, in the form of articles, criticisms, and help in distribution.

In spite of its successes (or because of them), many people feel that SftP has not realized its full potential. It reaches only a minute fraction of the million and a half scientists and engineers in this country (add in the technicians, students, and teachers who are not counted). Many articles lack high-quality analysis and the contents vary sporadically. Also, its unclear relationship to SESPA/SftP has cost it much in needed political support.

Last spring, discussion of these problems began within the Bagholders.1 The growth of the magazine (to a regular 48 pages) had made the task of coordinating the production and distribution of the magazine more difficult. To help alleviate this problem, Boston Area SESPA/SftP, upon request of the Bagholders, decided to hire a coordinator to help the Bagholders carry out their responsibilities. The coordinator was guaranteed movement salary (subsistence), to be paid out of general funds2 for six months (by which time increased sales and subscriptions of the magazine were to provide the money).

But more importantly, a critical assessment was begun of the whole mechanism involved in the production of the magazine. The existing structure, in which an editorial collective takes the responsibility for editing and putting out an issue of the magazine and then becomes part of the Bagholders for a year, had certain advantages: it encouraged new people’s creativity and freshness, provided the opportunity for many people to learn the political and production aspects of creating a magazine, prevented the over-centralization of editorial responsibility, and spread the task of producing the magazine over a large number of people in, say, the course of a year. But it had shortcomings, too. It was difficult for new people to participate in and learn about the magazine without first joining an editorial collective, the editorial collective had too few resources to draw on, considering the magnitude of its job, and the Bagholders had not provided sufficient support, coordination, and guidance.

The Bagholders thought it important to preserve the positive aspects of continually changing the editorial collectives while attempting to open up activities relating to the magazine to a wider constituency. We looked for a process which could provide support to the editorial collectives, enable people to learn about and participate in the magazine on a less than full basis, delineate better the responsibilities for overall coordination, and planning for the magazine’s development, and help in the integration of new people into the organization through their contribution to and discussion of the magazine.

What has grown out of these considerations is a re-organizational plan which eliminates the Bagholders as such and replaces it with a combination of two new groups: 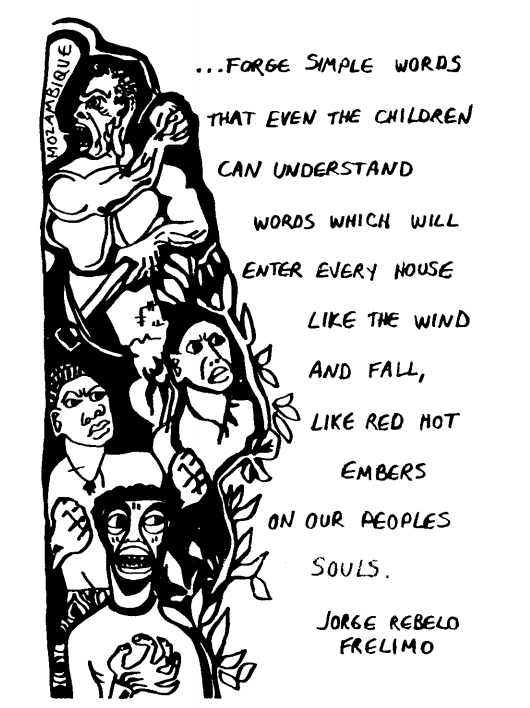 The Bagholders, in instituting this reorganizational plan, has taken the initiative to make a better magazine by involving more people in the process. This is a political decision. It is based on our perception of the changing needs of SESPA/SftP and motivated by our conviction that to be most effective as a political instrument the magazine must be directly accountable to the entire organization. However, since no mechanism exists for such accountability at the present time, we are trying to take these initiatives in a responsive way.

We find ourselves now in a transitional period between the old and the new structures. We are trying to establish the mc2 on a firm footing as we set up the magazine support group(s). The latter provides us with the opportunity to plan future issues of SftP by specifying a theme and working to write or solicit material for it long in advance. Several topical areas have been proposed; they include among them professionalism, the response to alienation by scientific and technical workers, a forum on strategy for political actions at scientific meetings, the philosophy and methodology of science, and the energy problem [see pages 30 and 31].

This reorganization will also facilitate a more active role for groups or chapters outside of Boston. We hope they will form and participate in support groups, i.e., in providing or organizing material for the magazine, and eventually will be able to take on editorial and production responsibilities.

The first task undertaken by the new mc2 has been to outline the editorial policies of SftP. These are a clarification and reaffirmation of past editorial practice:

Focus and Direction of SftP

Another task taken on by the newly-constituted mc2 is that of coming up with a proposal for the magazine’s objectives and orientation over the next year or so. To do this, of course, will require the  contribution of everyone in SESPA/SftP.

What should be the overall political purpose and function of SftP?

To whom should the magazine be directed?

These questions have no answer except within the framework of a more comprehensive political perspective. If we don’t know what our organization should be doing, and why, on the basis of some broad political strategy—a strategy that takes into account our function as a scientific and technical work force—then our actions will at best be random, at worst counterproductive.

The need for the formulation of a clearer political perspective has been expressed several times by many people in the last several issues of SftP. We feel this expression has been the result of our organization’s political development: we now understand the systemic nature of oppression, repression, and exploitation, and the thorough role that science and technology play, materially and ideologically. The question now is, what can we do about it?

For some, this is the most pressing problem of our organization—the development of an analysis that includes a strategic conception of how revolutionary change can come about, and what our unique tasks in that struggle are. Should the development of that analysis be taken as an urgent task of the magazine?

Others agree with the importance of our formulating a clearer political strategy, but argue that SftP is not the appropriate instrument for this task—that the magazine should be an educational tool directed to those who are not already outraged and disillusioned with the system, that it should appeal to a much broader stratum of science and technology-related workers and intellectuals.

Others, not necessarily rejecting the goals of revolutionary change, see the major tasks at hand to be learning how to develop a consistent radical practice within existing institutions, e.g., in education, industry, and research.

These different conceptions of the magazine may even be compatible.

We of the mc2 want to encourage as many of the members, groups, and chapters as possible to address themselves to these questions. Limited by our present energy and understanding, the mc2 depends upon everybody’s fullest participation to insure our moving in the best direction.

About This Issue
Actions at Imperial Science Meeting in Mexico