by the Chemistry Collective, Boston and New York

Several centuries ago Newton postulated that a body at rest tends to stay at rest. The consequences of this postulate are distressing when applied to a body with the mass of the American Chemical Society (ACS). SESPA first experienced the inertia of the ACS in April, 1972, at the Boston national meeting (see SFP, Vol. IV, No. 4). We went to the N. Y. meeting last August to discuss with the membership what we feel are the roots of the problems that chemists face; e.g. mass layoffs, discrimination, etc.

Together the N.Y. and Boston chemistry collectives of SESPA formulated objectives and planned activities. First it was important to establish communication with as many ACS members as possible to discover their needs and sentiments. Besides talking with people, we prepared a questionaire to poll opinions on subjects such as discrimination and the political role of the ACS. Second we hoped to encourage chemists to take action by stimulating them to consider the political aspects of their oppression and the oppression which technology makes possible. An automated version of The Automated Air War, a slide show prepared by National Action/Research on the Military-Industrial Complex (NARMIC), was shown continuously from a position near our literature table. We also sponsored an employment countersession, at which chemists discussed both the reasons for and solutions to their economic plight. January 1973 As much as possible, we attended various ACS committee meetings, at which we had a chance to dispute the positions of the influential elite of the ACS or their rubber stamps. Finally, we carried out a short disruptive action at the ACS Council meeting in order to bring dramatic attention to the grossly neglected area of discrimination against women in chemistry.

Some of these actions are worth considering in detail.

Unemployment, discrimination, and the industrial control of the ACS were major areas through which we felt we could relate directly to the needs and grievances of chemists. During a planning session, we came to the humbling conclusion that we did not know where most chemists stood politically. The idea of a questionaire emerged, which we hoped would serve three functions: 1) to survey the attitudes of chemists, 2) to focus on specific problems and bring up the idea that people can organize to solve them, and 3) to give us a mechanism for talking to as many people as possible.

Five hundred questionaires were given out and 234 were returned. The number of people who have witnessed or experienced discrimination is large enough to show that a serious problem exists. As one would expect, women have seen or experienced considerably more discrimination than men. Moreover, a large majority of the sample feel that it is the responsibility of the ACS to concern itself with this matter. The results of several other questions revealed the members’ belief that the ACS should take an active stand in protecting the interests of its members and the general public. It also appears that many working chemists feel both the need for some organized group acting on their behalf and the necessity of organizing themselves. The answers indicate that such groups at the workplace often do not exist and that there may be significant obstacles to establishing them. Very few people expect much help from the ACS and, in fact, suspect that the ACS is working against them in favor of chemical management. The idea that a professional society should not become involved in social or political problems is no longer accepted by the majority of the membership who answered our questionaire. 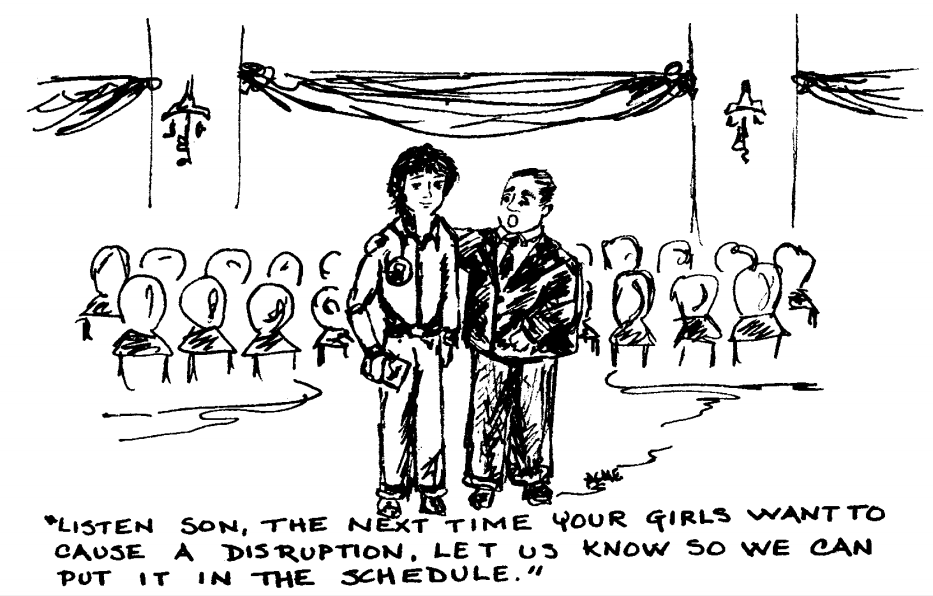 The N. Y. Collective constructed an automated, tablemodel apparatus for continuous showing of the slide show, The Automated Air War, by NARMIC.1 Our objectives were to elucidate for chemists the role of technology in the war and attract attention to our table. The show ran for four days. To our joy, there were always 10-15 people stopping to watch. It seems that having a visual presentation is a very effective way to get the attention of people milling around at conventions. Surprisingly, the slide show was the one thing we did which brought vehement complaints. In retrospect, we could have been more effective if we had conducted more informal rap sessions following the slide show. We expect that a slide show which relates directly to the experience of the audience would also be very useful.

Our most dramatic action was a disruption of the ACS Council meeting, a gathering of over 300 people debating everything from membership standards to saccharide nomenclature. Two women dressed in lab coats and draped with chains took over the podium and read a statement demanding rectification of the inequalities of women’s salaries and promotion rates, while a support group passed out copies of the statement to the council members. During the weeks before the convention, the Boston Collective had discussed at length the need, the objectives, and the nature of a disruptive action. We focused on discrimination because it is a critical issue: recent statistics published in Chemical and Engineering News (C&EN) had confirmed nationwide discrimination against women. We hoped to pose a threat to an ACS structure which ignores the needs and real problems of its membership, and at the same time present a positive alternative to the moribund status quo.

The Boston group learned a sharp lesson about collective movement action when they simply announced their ideas at a general SESPA planning session the night before the council meeting—although most may have approved the plan, those uninvolved from the beginning felt unenthusiastic. We approached the disruption the next day as a nervous inexperienced group of eight and came out exuberant, maybe a function more of emotional relief rather than political achievement. But we had succeeded in jarring and even threatening many at the council meeting as well as making an important statement. The theme and action had drawn out a full range of reactions from open hostility to confusion to qualified approval. The women in chains recently received a letter from the ACS President, reprimanding them for this “unauthorized interruption” and reminding us that the ACS “provides channels through which members’ opinions and desires can be made known.” However, this invitation to use proper channels is not as attractive as the generous offer made by an ACS official concerning future disruptions to simply let him know beforehand so that he could secretly work it into the schedule at the most advantageous time.

As part of our actions at ACS committee meetings the Chemistry Collective presented five demands to the Chemistry and Public Affairs Committee at its open meeting: (1) that the ACS should officially assert that it is unethical practice for chemists to work on any project funded by the D. 0. D. until further notice. (2) that the ACS condemn all aspects of chemical-biological-meteorological warfare and especially those carried out by the U. S. in S. E. Asia. (3) that the ACS actively lobby for the passage of the ToxIc Substances Control Act of 1972, (4) that the ACS embark on a public campaign for new priorities in research funding along the lines of science for the people, rather than science for the militarists. (5) that the Committee sponsor a discussion of the question: “What is appropriate public service for scientists under criminal
governments?” 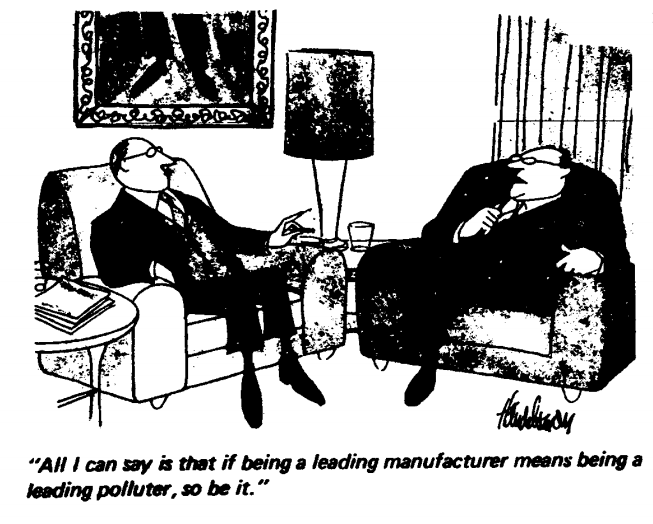 In the discussion that followed, our demands were not directly attacked but were purported to be based on controversial defmitions of war crimes, warfare, public interest, etc. In order to avoid taking action, the ACS bureaucrats resorted to the typical dodges such as: small overextended staff, outside their competence to act on these issues, someone else was looking into it, or they couldn’t get approval from the Directors. Our action taught us a little more about the “normal channels” of the ACS. Such a ritual, while necessary as a prelude to more direct action, can also be useful as a limited mechanism for bringing political issues into more open debate.

The Chemistry Collective went to the N. Y. meeting primarily to communicate with other chemists in hopes of determining how best to actively seek change. We were heartened to discover that most chemists we came into contact with believed that the ACS should do more to serve the needs of its general membership and the public, rather than the limited interests of major chemical industries. We also learned that the structure of the ACS eliminates, or at least diffuses, any attempts at substantive change. The Chemistry Collective has been “working through channels” on several issues such as discrimination against women and the relation of the ACS to war research. These attempts have been futile as a mechanism for change, but hopefully have set the stage for more direct action with other chemists who have seen through the liberal bullshit.

The next national ACS meeting will be in Dallas next Spring. We are interested in hearing from people who are planning to attend that meeting, although the contingent going from Boston and N. Y. will probably be small (maybe 0) because of transportation and economic considerations. We realize that focusing our actions only on the ACS is not sufficient for creating a movement for social change among chemists. We are thus planning to become more active on a local level in both academic and industrial situations. We hope to stimulate the formation of other groups around the country and to facilitate the interchange of ideas and experiences. If you are involved or are interested in becoming involved in working on changing the social and political uses of chemistry, please contact us c/o SESPA, Boston. We have already compiled a sizable mailing list of interested people (mostly chemists and biochemists at this time). Our collective enthusiastically looks to the future because, despite the inertia of the ACS, we have found many with whom we can struggle together towards a better world.

A Modest Proposal
The Atomic Establishment – A Review