For the past six years, the question of Polaroid’s economic involvement in South Africa has been discussed by that company’s white corporate managers. Polaroid, as a relatively new corporation, has established a liberal reputation in view of its hiring of blacks and its relations with the black community. It is the contention of this article that in fact behind all the farcical, liberal rhetoric is a corporation bet on profit through exploitation of the Third World. Specifically, Polaroid through its economic dealings in South Africa has supported and legitimized a system of apartheid — i.e. institutionalized inhumanity.

This fact has not gone unnoticed by an informed group of workers at Polaroid called the Polaroid Revolutionary Workers Movement, who responded to Polaroid’s participation in the economy of South Africa by issuing these three demands on October 8, 1970:

(1) that Polaroid announce a policy of complete disengagement from South Africa. We believe that all American companies doing business in South Africa reinforce that racist system.

(2) that Polaroid announce its position publicly in the U.S. and South Africa simultaneously.

In support of these demands, the PRWM has called for a boycott of all Polaroid products until the demands are met.

The specific incident which triggered these demands was the knowledge that Polaroid supplied a computerized system of identification (ID-2) to its distributor in South Africa. The importance of such an identification system must be viewed in terms of its function for the maintenance of the apartheid system-i.e. every black in South Africa must carry a passbook with him at all times which contains his complete personal history. The passbook is used by the South African government to restrict the movements, impose curfews and control the place of residence of all blacks-because of the ‘help’ of Polaroid, no one can, or is allowed to pass for white.

To counter these charges before they were made public, G.R.Dicker, Assistant Secretary of the Polaroid Corporation, issued a memorandum which stated that “There is absolutely no indication whatsoever of the Polaroid ID-2 system being utilized by the government of South Africa in implementing its apartheid program” However, the memo goes on to note that: “All sales of the JD-2 system have been made to the independently owned and operated local distributor” (Frank and Hirsch, Ltd.) “for resale to industrial users in South Africa, for employee identification purposes and to the South African Army and Air Force solely for identifying military personnel.” This memo of October 6 is compelling for two reasons: (1) it is able to see no relationship whatsoever between these identification programs described and the system of apartheid-which needs these identification programs in order to function; and, (2) it implements the often used device of ‘passing the buck’-we don’t support apartheid, we merely sell to our distributor. However, the distributor is able to control the use of the product from there. In describing the distributor, Mr. Dicker referred to it as a company “unique in South Africa in its adoption of full, equal employment practice for blacks”. Even Polaroid’s distributor couldn’t and wouldn’t buy that line — Frank and Hirsch responded through the Johannesburg Star on November 21 by stating:

“I do not know where they could have obtained such a statement. We are governed by the laws of the country. Would they allow the existence of such a policy? It is not possible.”

Polaroid then contradicted its own memo of October 6 when it issued another memorandum on October 21:

“‘Polaroid has in the past prohibited the sale of its identification system to the South African government for use in the apartheid passbook program. We are now discontinuing sale of any Polaroid products, including film, directly or indirectly, which might be used in this identification program.”

So, two memoranda directly contradict each other: the first stating no implication whatever in the apartheid identification program, the second, directly implicating the company- a classic example of liberal double talk.

In order to improve their public relations, Polaroid delivered a public statement in an ad form to the major Boston newspapers on November 25:

“We abhor apartheid, the national policy of South Africa, that divides the races and denies even the most fundamental individual rights to the Blacks.

So, what is Polaroid doing in South Africa? Is it going to stop business there?

That may seem an unusual answer for an American corporation to make. But we feel the question of South Africa is too important and too complex for a hasty decision.”

The “complexity” of which the corporation speaks can only be in the minds of the liberals who run Polaroid. Of course it is very complex to hide behind a liberal facade and continue to exploit the blacks of South Africa. through racist policies. From a moral point of view, the complexity of apartheid does not exist-it is a matter of white vs. black-a system which assures the supremacy of the white power structure. From a corporate point of view, apartheid is also not complex; liberal rhetoric aside, Polaroid’s profits necessitate foreign investments, of which South Africa is an integral part.

In order to further justify the description of the problem as complex, Polaroid sent a task force of four employees to South Africa for investigation. No one from the PRWM was asked to go.

As a result of the furor over South Africa, Polaroid’s relations with the black community in Cambridge and the surrounding area have also degenerated. Immediately after the demands were issued, PRWM received support from the Boston chapter of the NAACP and the African National Congress-the largest anti-apartheid organization in South Africa. On December 30, the Boston Globe carried a story indicating that Polaroid Corporation “was shocked to learn that its $20,000 contribution to Boston’s United Black Appeal had been divided between a black group in Cairo, Illinois and an undisclosed number of organizations working for the liberation of blacks in South Africa. This decision on distribution of funds by the United Front Foundation was interrelated with the controversy over Polaroid’s business in South Africa. The action was taken to show support of the three demands of the PRWM. Polaroid’s response showed clearly that it, like other liberal corporations , has no intention of letting blacks made decisions for themselves especially when it concerns disbursement of their donations. Appearing in Roxbury’s Bay State Banner on December 24, 1970 it read:

The newest installment in the situation is Polaroid’s response to its fact finding team. The statement was issued in the form of an ad on January 14, 1971: ” …Polaroid will undertake an experiment in relation to its business activities in South Africa.” This “experiment” includes a commitment from Polaroid to work with its distributors to increase salaries and benefits of their black employees. Contrary to Polaroid’s pronouncement, this will not alter significantly the quality of life of South African blacks since housing, voting, and education procedures of the apartheid system will still be maintained. The next step in Polaroid’s reform movement is to increase job training programs of blacks within their companies (i.e.distributors). This will not qualitatively change the status of blacks either since positions of leadership in an interracial situation would be maintained by whites in order to hold onto their supremacist position. This training would only he up to certain joh levels, since all of the prime control or power-related jobs are held by whites-the system of apartheid functions in this way.

The last definitive statement on Polaroid’s experiment exhibits Polaroid’s dilemma in trying to reconcile the corporate manager’s liberal rhetoric with the necessities of a capitalist corporation. “We believe education for Blacks, in combination with the opportunities now being afforded by the expanding economy, is a key to change in South Africa.’· The educational system of South Africa is hardly separate from the political and economic system. The entire educational structure is designed to perpetuate the black population as a cheap labor force and it does not and cannot provide opportunities for real advancement. In fact, the laws and the ideology of South Africa explicitly deny this. This type of education does not liberate, it imprisons. Neither money nor liberal intentions can change that system from within.

Polaroid has rationalized its way out of its moral commitment to equality by way of this benevolent and totally ineffective method of working within a particular repressive social system-and Polaroid still gets to keep the profits.

THE DEMANDS OF THE POLAROID REVOLUTIONARY WORKERS’ MOVEMENT HAVE NOT BEEN MET. BOYCOTT ALL POLAROID PRODUCTS. POWER TO THE PEOPLE!

For background reading we suggest : 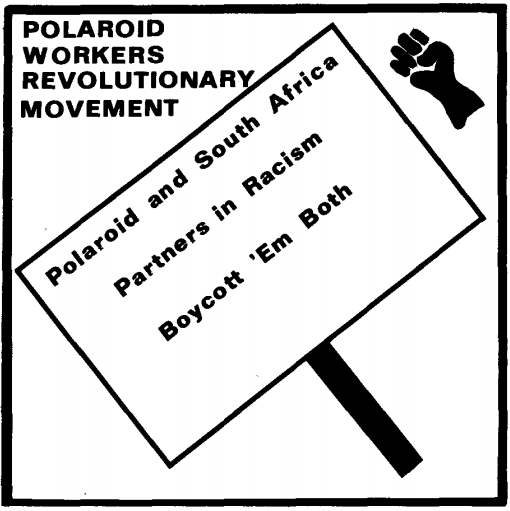