Book Review — Contested Terrain: The Transformation of the Workplace in the Twentieth Century

Marx generally argued that the demands of capitalist production would create increasing antagonism between workers and managers, culminating in the rupture of existing social controls. The fact that this rupture has not happened has led Marxists to question how capitalist control is actually maintained in the workplace. Harry Braverman pioneered this field with his analysis of the long-term trend towards the “deskilling” of work. Drawing directly on existing managerial literature (especially the work of Frederick Taylor), he argued that employers had successfully separated planning from execution on the job, thereby depriving workers of any basis for criticizing or reconstructing the existing order. What Braverman left out was the study of worker response to the introduction of new control systems, and the way these responses affect managerial strategies. Richard Edwards’ new book goes a long way towards filling this gap, and in the process he fundamentally revises Braverman’s approach.

The virtues of the book are unmistakeable. Edwards’ analysis, though ambitious and wide-ranging, is persuasively presented and based on very solid historical knowledge. He does not avoid theoretical complexities — he has a penchant for three-part schemes, which sometimes split into nine-part cross-schemes — yet he presents them lucidly and with a comfortable flexibility. These qualities have already earned the book almost equal praise from In These Times and Business Week.

The core of his argument is the description of three different forms of capitalist control of the work process, which have roughly succeeded each other in time. The first is “simple control,” based on the direct personal authority of managers. In an elegant piece of historical analysis, Edwards shows how this structure broke down in the huge monopoly firms which developed in the early years of this century. In the face of increasing worker resistance to arbitrary personal commands, employers tried a number of experiments in search of a new form of control adequate to these large, impersonal organizations. One relatively unsuccessful attempt was Taylorism, which sought to preplan a worker’s every movement on the job. More successful was “technical control,” exemplified in the assembly line, in which the machines themselves carried in depersonalized form the commands of management. But as we know from countless studies of “blue-collar blues,” worker resistance to the monotony and alienation of machine-governed work has proved costly to employers. Thus the development, in the post-World War II period, of a new and more subtle style of management which Edwards labels “bureaucratic.”

Though the earlier forms of control survive today in secondary sectors of the economy, it is the bureaucratic form which, Edwards argues, increasingly characterizes the most advanced and powerful companies. It is marked by the extension of written job descriptions, formalized disciplinary and reward procedures, and finely divided functional hierarchies. By embedding authority in the total social structure of the firm, this system masks more fully than previous ones the relations of domination in the workplace. Indeed, by offering workers a lifelong “career path” with steadily increasing benefits and security, such firms often succeed in tying the perceived interests of the work force to the success and growth of the company — a development which poses new problems for the critics of capitalism.

Even in this brief description it should be clear that Edwards diverges more and more from Braverman as he approaches the modern era. For Braverman Taylorism — the fragmentation and deskilling of the work process — is the key to understanding the evolution of the workplace. Edwards sees in Taylor’s ideas only one, and not the most successful, of management’s attempted solutions to the crisis of power in large firms. It is precisely the careful attention Edwards gives worker resistance to Taylorism — a topic Braverman leaves aside — which leads him to view the bureaucratic form as a highly significant innovation, solving at least temporarily for capitalists the problem of “motivating” the work force.

There seems little doubt that Edwards is right in his general perception that something other than Tayloristic control is emerging in the monopoly sector; understanding the limits of and contradictions within this structure is an important task. Edwards makes a very good start, but areas of vagueness crucial to his concept of “bureaucracy” remain. The term has classically referred to a highly impersonal, formalized structure of carefully defined roles, and Edwards focuses on those aspects of modern management that reflect this image: the increasing differentiation of hierarchical positions and the spread of written “job descriptions.” Yet many of the most crucial aspects of the new style are developing in quite another direction. A major catchword of management consultants these days is “humanism,” and organization development specialists speak enthusiastically of improving the “quality of working life” of employees. The thrust of the new ideology is not to maximize the specialized efficiency of workers, but rather to stimulate their active loyalty to the firm. The control system, in other words, presents a warmly paternalistic face which is far more personal than the “technical” control methods which preceded it.

And there is more than just talk in this management strategy. To a considerable degree the very largest companies have, during the past decade, experimented with various forms of “work restructuring” which increase the responsibility of workers on the shop floor. These experiments range from job enrichment, which reverses the fragmentation process and restores some kind of “complete” task to the worker, to autonomous work teams in which groups of employees have control over job assignments and pacing. One source at the Harvard Business School estimates that over half of the “Fortune 500” companies are now trying such initiatives. One result has been the reduction of rigidly defined roles, allowing workers more freedom to share or rotate tasks. In some leading companies the trend towards increasingly differentiated positions and rewards has been reversed, and a process of simplification has begun even at the lowest levels. Edwards recognizes some of these developments, but he seems uncertain about how to fit them into his notion of “bureaucracy.”

Having sketched a picture of management’s new means of control, Edwards goes on to explore the weaknesses of this bureaucratic system. He identifies three contradictions which may bring it down. The first is that the high levels of job security and benefits guaranteed in the new structure create rigidities in the labor market, transforming labor more and more into a fixed cost. The second problem, he suggests, is that the intermingling of business and government policy made necessary by the centralization of industry will become increasingly visible to the general populace and create a crisis of legitimacy. The third contradiction, unlike these first two, is located in the workplace itself — and it brings once again to the foreground the problem we have already seen: the problem of confronting the “human” face of modern management. 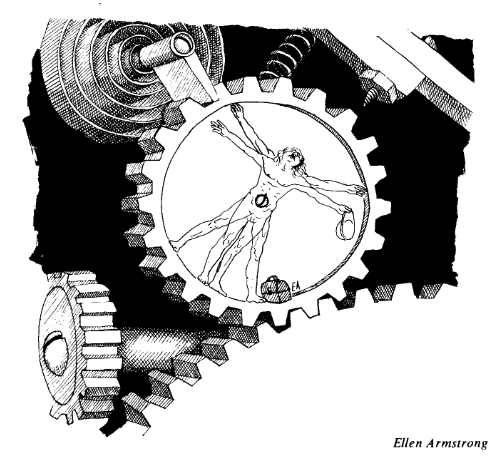 Edwards’s claim is that bureaucratic control has “inadvertently … established the conditions under which the demands for workplace democracy flourish.” It does this by creating among workers a sense of long-term identification with the enterprise. Such demands, he says, “constitute a potentially fundamental challenge to employers’ power.” (p.153). Furthermore, management’s attempts to channel these desires via the work restructuring schemes mentioned above compound the danger. According to Edwards, the granting of some control over workplace decisions leads to a domino effect by which workers will soon push for wider powers. In this way “capitalists themselves are led, even forced, to introduce the very schemes that threaten their grip.”

It is an exciting argument, but Edwards presents no evidence for this supposed domino effect. In fact, the evidence in general can be read to suggest an opposite and more disturbing conclusion. A truly “bureaucratic” system of management often sparks resistance and organization among workers; but the more “humanistic” bureaucracy which is spreading today has not done badly in muting dissent. Though employers made some mistakes in early experiments, it appears that they have increasingly succeeded in designing job structures that grant significant yet limited autonomy to workers, in a way that does not threaten basic management prerogatives. The work humanization movement can therefore be seen as an attempt by employers to bring the democratic aspirations of workers into the support of capitalism – and contrary to Edwards’s claim, it is not at all clear that this is impossible.

Yet, there is still more to the book. In the final section Edwards broadens his focus from the “contested terrain” of the workplace to the class structure of the society. Again his divergence from Braverman leads to new conclusions: where Braverman thought that the deskilling process was leading to a homogenization of labor, Edwards argues that the coexistence of different forms of control in different parts of the economy leads to “fractions” within the working class. Two chapters are devoted to the description of these fractions, and to trying to show that these divisions within the working class are ultimately less important than the common grounds of antagonism to capitalists. In a final chapter, he argues further that the power of large firms poses a direct threat to democracy in the political as well as the industrial sphere, and he closes with a call for socialists to take up democracy as a strategic end in itself. These arguments towards the end of the book move away from the solid base of historical evidence which supported the earlier sections, and they are perhaps necessarily less convincing; but they define issues that are likely to be central to political debates of the next decade.

Charles Heckscher is a member of the Group for Work Democracy, a Boston-based collective studying the prospects for worker participation and self-management.