These songs are excerpted from the songbook published by the Clamshell Alliance, Songs to Stop Seabrook By, compiled by Beth DellaValle, David DiGiuseppe, and Jenny Van Pelt. The book is unfortunately out of print at present.

Excessive construction and the profits it brings –

Increasing the rate base with nuclear stations,

When the sun shines,

When the wind blows.

I simply remember my favorite things –

And then I don’t feel so low.

Putting a nuclear plant on the docket,

Rigging the hearings so no one can block it,

Repeatedly lying that solar’s no answer,

When a fuse blows,

When a pipe breaks,

When the core melts down,

I simply remember my favorite things,

And evacuate the town.

Stopping the terrorist Clams at the borders,

Getting hot tips from the ultra-right wing.

When the day comes,

That the nuke’s stopped,

When the truth is aired,

So that I won’t feel so scared.

(Music: “My Bonnie Lies Over the Ocean” Words: Joanna Cazden)

They’re taking away all our power

By bringing in nuclear plants.

They talk of technology’s flower

We’d rather give safety a chance.

The fish have washed up on the Hudson,

The pipelines have cracked in Vermont,

A poison mist hangs over Millstone.

What more proof could anyone want?

The companies can’t get insurance

The dangers are so plain to see.

How long can they lie to the public

They promise to safeguard the poisons.

Plutonium tons they have stored.

But we know there’s lots unaccounted for.

And “atoms for peace” go to war.

They’re taking away all our power

Doomsday machines they will tower

We’ll stop them however we can …

I’m running my farm on a windmill

My factory runs on a water wheel,

But folks now are coming together.

Control of our lives we demand.

We think we can handle it better.

Than experts from NRC land …

Our friend Sam, he toppled the tower

And Ron sat and froze in the sky.

And our turn will come by and by.

Power, power, community power is ours for free!

Power, power, oh bring back my power to me.

They found some funny rocks out on the Utah flats

You can’t serve it up for dinner, it won’t answer when you call

You can’t throw it in the outhouse, it won’t ever tell a lie

You can give it life and money but you cannot make it die.

They thought that they could tame it, so they built themselves a bomb

And when they had decided that nothing had gone wrong

So their safe stuff would be safer, and we could all sleep well at night. (Chorus)

Well it’s the rage in Russia, in China and in France.

Now every country wants their own atomic power chance.

Then they stock it up in missiles ’til they have a little war. (Chorus)

It’s in the Mississippi, it’s in the kitchen sink

It’s in the snow on Christmas, it’s in the milk we drink

And underneath the continent there’s tons of it on store

And we only have to keep it safe a million years or more. (Chorus)

With strong defense and honor- and Business right or wrong

‘Cause for all their deeds we can be sure, we can kiss our ass good-bye. (Chorus) 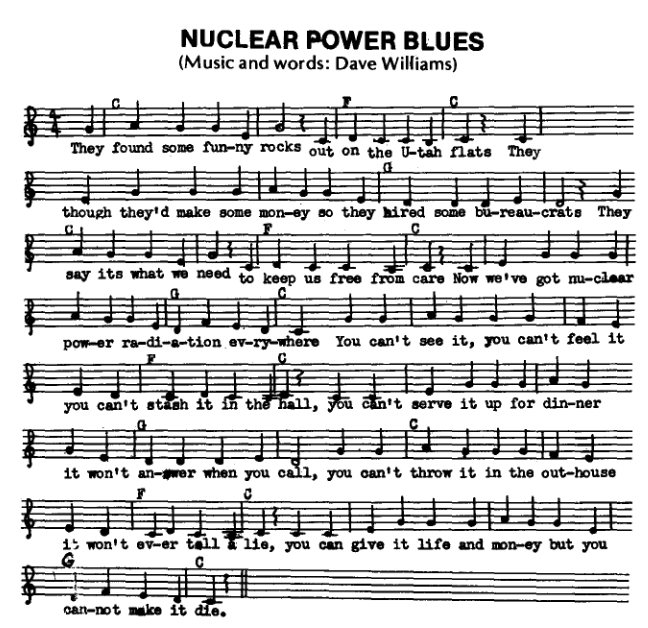 Current Opinion: Beyond Seabrook
Who’s at the Controls? Sanrizuka Farmers vs. the New Tokyo International Airport