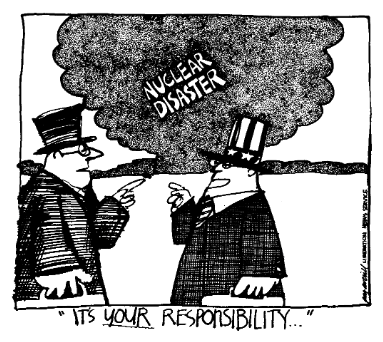 This issue of the magazine focuses on the organized struggles of people united against corporate and state power. The anti-nuke struggle and the fight against the New Tokyo International Airport at Narita are attempts to democratize decision-making and to oppose the direction of capitalist economic development. In each case, the complicity and common interests of the state (be it through the police, a regulatory agency, or the courts) and of the capitalists, is very clear.

The Narita Airport and European anti-nuke battles share a degree of militancy thus far unparalleled by the US anti-nuke action. Furthermore, both Narita and the European anti-nuke campaigns are made up of a coalition of workers, farmers and students; a similar coalition does not yet exist in the US anti-nuke movement. Although all of the struggles are over similar issues, the tactical differences reflect differences in political aware-ness and ideology.

While both the Japanese and European struggles focus on specific issues, it appears that many of the activists view their issue in its larger political-economic context. Both movements seem to be explicitly anti-capitalist, seeing the airport and nuclear power as means by which capitalists maintain power and maximize profits.

Such an analysis is beginning to be formed by participants in the US anti-nuke movement. However, one thing the people fighting the airport and those fighting nuclear power (in both the US and Europe) all share is a strong opposition to the devastation and destruction of the land that such nearsighted “development” brings.

Nuclear power is suffering many economic setbacks in the US—drastic cost increases in plant construction and few orders for new plants—as authors Bowring, Folbre, Michak, and Harris show in their chapter from the forthcoming book No Nukes. This has happened in spite of the built-in economic incentives for developing nuclear power. Public pressure for safer, cleaner reactors is partly responsible for the slowdown in nuclear plant construction.

But will this slowdown continue? Another “energy crisis,” over shortages made more severe by pro-nuclear economic interests (often tied to those of coal and oil) could suddenly make nuclear power seem more necessary. As a result, Federal subsidies for the hidden costs of nuclear power generation, such as fuel reprocessing, waste disposal, and reduced liability for accidents, would grow even further and in turn would add to the attractiveness of nuclear power. The anti-nuclear movement has spent most of its effort opposing nukes, and the development of renewable energy sources, such as solar, has just started. Thus, it is premature to hope for, much less predict, the demise of nuclear power.

This lends importance to the Current Opinion on the latest Seabrook demonstration, which discusses the potential of the no-nuke movement for fostering widespread political and economic change.