Health Care in Zimbabwe: The Medical Drive Needs Your Support

A liberation struggle to return control of Zimbabwe (Rhodesia) to its people has been raging for many years, led by ZANU (Zimbabwe African National Union) which is now a component of the Patriotic Front. The 6 million Africans of Zimbabwe, 96% of the population, are ruled by 1/4 million white settlers. This racist regime has close ties economically and politically with the U.S., Britain, and South Africa. This regime owns half of the land (all the fertile land) and controls the political and economic structure of the country. The Patriotic Front is uniting the liberation forces and coordinating the armed struggle. Presently one third of Zimbabwe is liberated territory administered by the liberation forces.

The health care needs of the Zimbabwean people are many. It is important to recognize that most of the disease and illness is in direct result of colonial oppression, racism, and exploitation. Under the settler regime health care services have been totally inadequate or nonexistent for the African population. The white population has a ratio of one M.D. per 1800 persons, while the rural African population is served by one M.D. per 100,000 persons. As the war of liberation intensifies, the Rhodesian government has been withdrawing what little health services exist in the rural areas. They do this by closing district health centers and hospitals; meanwhile they are constructing modern hospitals in the cities to serve whites.

Communicable diseases are the most prevalent. Malaria, parasitic diseases, especially schistosomiasis and helminthiasis, tuberculosis, various dysenteries, and childhood diseases are epidemic. These are all public health problems which could be eradicated through education and a vigorous campaign to wipe out the intermediate hosts (mosquitoes, snails, etc.) and vaccinate the population.

The Zimbabwean people suffer greatly from malnutrition and other less severe forms of dietary deficiencies because they have had no access to fertile lands. “Among Africans the main causes of death were pneumonia (from overexposure); measles; ill-defined infant disorders; avitaminosis (caused by lack of vitamins) and other states of dietary deficiency; gastroenteritis and colitis; and tuberculosis. Of these deaths recorded, about 35% were among infants.” (Area Handbook for Southern Rhodesia, Nelson et al., U.S. Government Printing Office, 1975). The infant mortality rate for blacks is more than 300 per 1,000, fifteen times that for whites.

Biological warfare has been used by the Rhodesian government against the people in the liberated zones. In mid-1974 a cholera epidemic broke out in the northeast, where cholera had never been a problem. Smith’s regime had vaccinated the few white settlers before the disease broke out. The Liberation forces learned that the settler authorities had purposefully contaminated the water supplies with cholera organisms when captured white soldiers, who were suffering from thirst, refused to drink the water. The World Health Organization provided ZANU with cholera vaccines, thereby recognizing that ZANU was responsible for the population’s health. (“Introductory History of the Zimbabwe Liberation Struggle,” Brown and Komatsu, Political Discussion, 11 /76).

In the liberated zones, an area including 2 million people, ZANU/Patriotic Front has guided the people in creating a health care system that truly serves their needs. This means working towards being self-sufficient, training people to provide health education and services to the population. In the refugee camps in Mozambique, ZANU/Patriotic Front is responsible for meeting the health needs of almost 100,000 people. In the recent attacks on the refugee camps by the Smith regime, a clinic serving 10,000 people at the Chimojo camp was destroyed. The liberation forces must also treat the war injuries of the freedom fighters and care for their families.

Medical supplies are urgently needed now in Zimbabwe. A drive is under way in the U.S. to raise money and supplies for the struggle in Zimbabwe. We can aid the medical drive in many ways. Donations of money, textbooks, supplies and resources are the kind of material aid we can provide. Any amount will be useful: 30 cents will buy a vial of penicillin; $15 a half-pound of quinine to treat malaria; $100, IV tubing for an entire ward; $3,000, a mobile medical van. We can also inform our co-workers and friends of the liberation struggles in Zimbabwe and the rest of southern Africa and urge them to support the medical drive.

Other material aid might include technical reports in the areas of nutrition, sanitation and tropical medicine; preparation of medical literature packets; donations of medical supplies and instruments; arranging contacts with progressive medical professionals; and fund raising. A “dossier” of specific medical needs prepared by the Zimbabwe African National Union (ZANU) in the liberated zones of Zimbabwe and independent Mozambique can be sent on request. 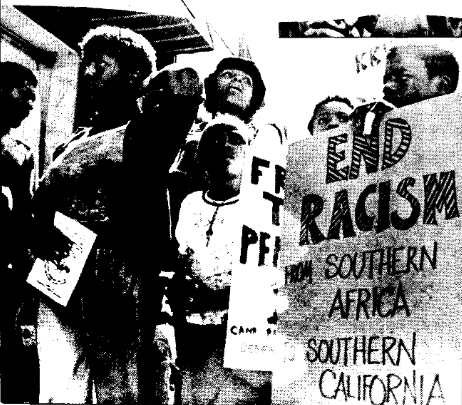